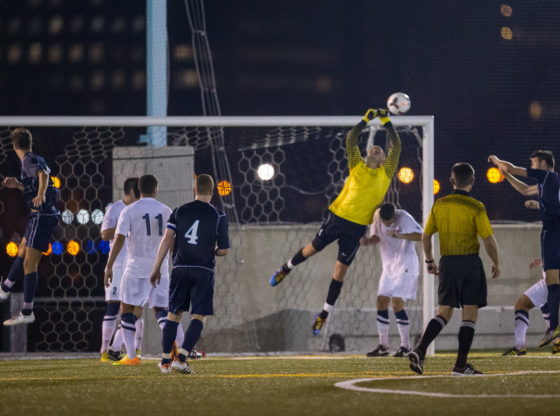 The St.Francis Brooklyn Terriers men’s soccer team fell in their season opener 1-0, to the St.Joseph’s University Hawks, at Sweeney Field in Philadelphia, Pennsylvania.

The Hawks scored the lone goal of the game in the ’14, Mike Glazer took a corner kick pass from Tim Lazorko and put it past Terriers’ Goalie Jack Binks.

The Terriers, who outshot the Hawks 20-9, had multiple opportunities to tie the game.

In the 19′, sophomore Sal Barrone came in down the left side but his shot was saved by sophomore goalie Jay Higbee.

The Terriers had another opportunity in the 32′, Nyle Patel fed Fabian Suele who shot the ball over the net.

Patel set up another opportunity in the 59′, his corner kick was headed wide by senior captain Andy Cormack. The two connected again but this time Cormack’s shot went off the side of the net.

The Terriers’ attack wouldn’t let up, with less than 10 minutes left in regulation junior Phil Shafer’s shot was stopped by Higbee, who made 5 saves, and then Patel floated the ball over the net from the right side.

Redshirt junior goalkeeper Jack Binks made three saves on the night in the loss.

The Terriers return to action on Tuesday when they host the Manhattan Jaspers in their home opener at 7:00 P.M. at Brooklyn Bridge Park