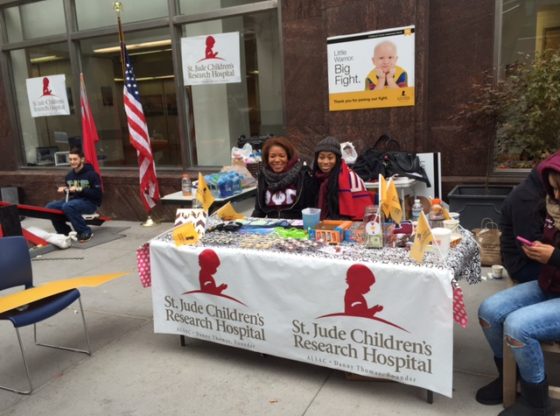 TKE’s mission is to spread charity and love. Last year the fraternity pledged $1 million over a five-year period, with each chapter contributing a percentage of that goal. While St. Francis’ chapter of TKE ultimately fell short of their $20,000 dollar target for this year, they still raised over $13,000 for St. Jude’s.

This is the second year of the fundraiser, with last year’s event raising around $10,000. Greg Cronen, the president of TKE last year, came up with the idea of seesawing to represent childhood innocence in an urban setting.

“It feels amazing,” said TKE Chapter President David Datzkow. “St. Jude’s treats 8,000 kids with childhood cancer annually for absolutely no charge. They do so based on the idea that ‘no child should die in the dawn of life’ which is a dream I believe we can all get behind.”
The members of the fraternity were also joined by the ladies of Theta Phi Gamma, Zeta Gamma Delta, and Kappa Theta Nu, who were selling hot chocolate to benefit St. Jude’s. They are looking forward to next year’s event and hope to raise even more money for a good cause.