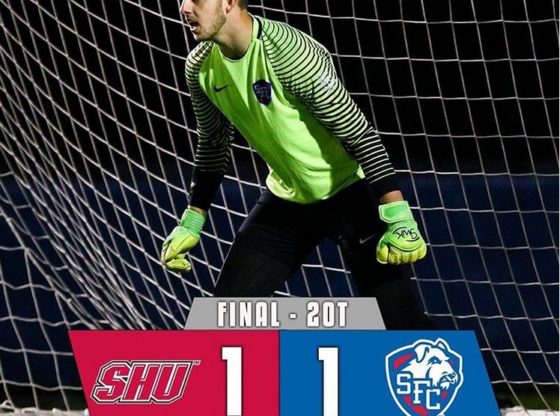 Terriers currently hold the fifth spot in the NEC Conference, together with Robert Morris.

Both the teams have recorded 10 points so far.

However, with Bryant’s victory over Fairleigh Dickinson on Friday afternoon, the fourth position for playoff qualification is five points far.

With only one match remaining, that means that St. Francis Brooklyn can’t compete for the playoff spot any more.

Terriers took the lead in the 17th minute, with Alexis Petit’s first score of the season.

The French defender headed in a ball off an assist from senior defender Marco Torriani, following a corner by Edoardo Belfanti.

That was Torriani’s first assist of the season, as he made his first start of the 2019 campaign, playing all 110 minutes of the match.

Sacred Heart tied the game in the 39th minute with Segundo Navarro’s seventh goal of the season.

Before the march, St. Francis celebrated its senior class:

Terriers conclude the NEC 2019 Regular Season on Sunday, November 10, when they face LIU Sharks away at 1 p.m.

﻿Men on a Mission: Basketball 2019-2020 Season Preview
Women’s Basketball: The Terriers Fell in Their Home Opener