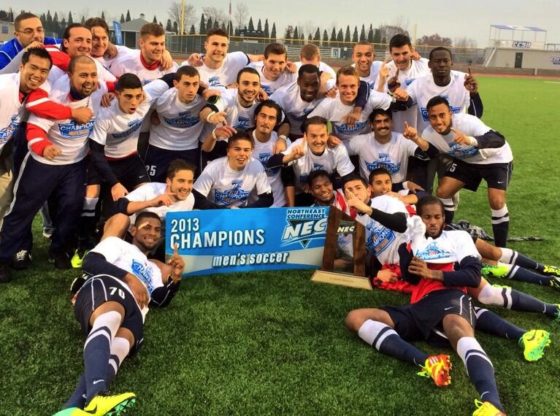 The St. Francis College men’s soccer team defeated Bryant 3-2 on Sunday, November 17, 2013, to become the NEC Champions for the first time in 15 years.

Bryant took the lead 8 minutes into the game when sophomore Brett LaRocque broke past St. Francis’ defense and got the ball past SFBK keeper Jack Binks.

Bryant had the advantage going into halftime with the scoreline being 1-0.

Two minutes into the second half of the game, SFBK’s Kevin Correa scored on a left-footed free kick, scoring his 12th goal of the season, making the game an even 1-1.

1:07 later LaRocque took advantage of a defensive mix up on SFBK’s part and fed the ball to Lucas Guerriero who scored, giving Bryant the lead once more at 2-1.

In the 70th minute Correa scored once more on a free kick making it an even scored game once more at 2-2.

The rest of regulation time only had near chances by both sides. The closest of which was SFBK’s Larry Lopez’s shot from 35-yards out that deflected off the top of the crossbar in the last seconds of regulation time.

With the score even at 2-2, the game went into its first overtime period.

Seven minutes into the overtime period, senior SFBK co-captain Andy Cormack stepped up for a free kick on the edge of the box and shot the ball in the far side of Bryant’s net. The golden goal ended the game with St. Francis winning at 3-2.

“Me and Kevin were talking about who was going to take it [the penalty kick]. He said you’ve got the space. I said I’m gonna hit it, I’m gonna put it in there and I did. It went exactly where I wanted it to go,” said Cormack.

Head coach men’s soccer coach Tom Giovatto had no doubts that Cormack’s free-kick would go in either.

“I knew who was taking it. He’s done it before for us. That was his spot. I knew it was going in,” said Giovatto.

Co-Captain Cormack was certain that the team would win the NEC Championship.

And the team did just that.

The title is the first for St. Francis since 1998 and 5th in the school’s history.

Gabrial Bagot, Jack Binks, Andy Cormack and Kevin Correa were all named as part of the 2013 NEC Men’s Soccer All-Tournament Team. Correa being the MVP.

Monday, November 18, 20113 at noon the Terriers will find out who their NCAA opponent is. The team will be heading into the next phase of postseason with a 12-5-1 record.