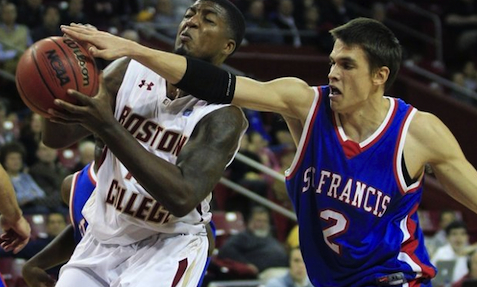 6’10” Spartans center Kyle O’Quinn proved to be a match-up nightmare for the Terriers as he recorded a double-double, scoring 21 points while grabbing 11 rebounds.

Teammate Chris McEachin assisted with 20 points as well but it was Pendarvis Williams who led the Spartans with 24 points.

Perunicic hit a clutch three-pointer with under a minute to play that brought the Terriers within striking distance.

However, it was too little too late as Norfolk State maintained a steady lead and hit free-throws down the stretch to close out the game.

Those same struggles persisted in the second half for St. Francis as they only converted on 10-19 free-throw attempts compared to Norfolk’s 24-of-38 free-throw makes.

The Spartans were great at capitalizing on St. Francis’ miscues all game as they had 26 points off 17 Terrier turnovers.

St. Francis center Akeem Johnson started the second half after playing just eight minutes in the first half and had an immediate impact as he scored the first eight points for the Terriers coming out of the break.

Both teams trade baskets back and forth but Norfolk’s lead stayed consistently in double-digits.

The majority of Norfolk’s scoring came off easy points in the paint and second-chance opportunities as St. Francis did a sub-par job boxing out and grabbing defensive rebounds.

Nichols scored the first points of the game as he hit a three-pointer from the corner on a nice drive and dish from Perunicic.

Perunicic followed up with a trey of his own to put the Terriers up 6-2 early in the game.

The score was 26-13 when the tide started turning for the Terriers.

After Norfolk State regained a double-digit lead Nichols grabbed two offenseive rebounds for the Terriers and scored on a second chance lay-up.

Guard Brent Jones continued the surge for St. Francis by scoring five points in under a minute to reduced the Spartans lead to just seven points.

St. Francis’ bench play kept them in the game for a while as they outscored Norfolk’s bench 18-11 for the game.

The Terriers’ scrappiness was prevalent throughout the game but the team lacked a consistent scoring threat from behind the arc.

Coming into the game on Friday Norfolk State was one of the best teams in the country at defending the three-point shot as opponents are shooting just 26% on the season and just 39% from the field overall.

The Spartans displayed that defensive dominance once again as they limited the Terriers to shoot just 27% (8-30) behind the arc.

Reigning NEC Player of the Week Ben Mockford leads the Terriers with 13 points per game and is the league’s best long distance shooter averaging 3.3 treys per game but had a below average contest against Norfolk State as he only shot 25% (2-8) from downtown and totaled eight points on the night.

Terriers’ next home game is against Brown on December 29 at 7pm.