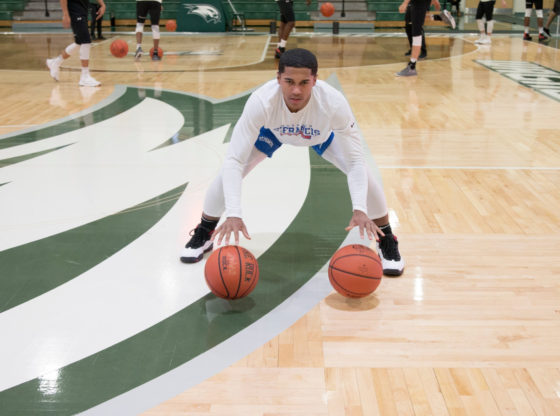 It was an unusual start that saw the St. Francis Terriers (9-6) turn the ball over five times with only 15 minutes to go in the first half.

Though the Terriers managed to make it out alive in this one, as they knocked off the Wagner Seahawks (6-7) in a 76-61 win to clinch their first NEC win of the season at Spiro Sports Center on Saturday night.

Jalen Jordan came alive in the second half, scoring 23 points on 60% shooting from the field. Glenn Sanabria was a key factor in the game, dictating the pace for the Terriers, as he scored 18 points on 7-11 shooting.

The Seahawks would open the game with a slight edge over the Terriers as they lead with 5 minutes left into the half. But all momentum would swing over to the Terriers after that.

The Terriers took only their 2nd lead of the game after Christian Rohler’s and-1 bucket with 30 seconds to go heading into the second half. Rohler missed his free throw, but the Terriers would never trail after that. Rohler would finish with only 3 points and 1 rebound.

With the Seahawks playing tight defense, Jalen Jordan would turn the ball over. Though the Terriers would get the ball right back after Sanabria’s steal. Sanbria passed it to Chauncey Hawkins who dribbled down court, and kicked it out to Jordan for the three — who would get fouled while making the shot. Jordan would make it a 4-point play to give the Terriers a 54-46 lead.

After a made field goal by Saunders to make to make it 61-72, the Seahawks would begin to full-court press and foul with under 2:00 remaining.

With 40 seconds to go, Hawkins would receive an inbounds pass and slip away from Seahawks defenders to dribble the ball out into a win for the Terriers.

The St. Francis Terriers will get 5 days rest before the team opens up at home against the Robert Morris Colonials on January 10 at Generoso Pope Athletic Complex.