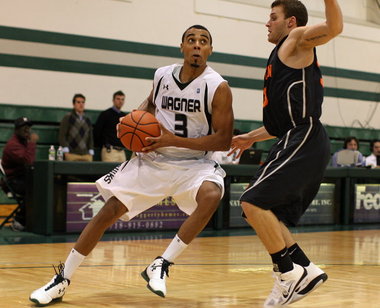 Game Recap:
The Terriers (8-10) had a 37-34 lead at halftime but were unable to hold off the resilient Seahawks (15-3) who battled back and won by eight points after outscoring St. Francis 39-24 in the second half.

Wagner were down 33-22, their largest deficit of the game, with 3:42 to play in the first half but kept their composure and went on a 12-5 run to end the first half.

St. Francis took an early first half lead and held it until 16:40 to play in the second half when Wagner went in front 41-39. Wagner never gave the lead back.

In the second half, however, St. Francis suffered from an injury to point guard Brent Jones and started to play sloppy basketball, while Wagner’s halftime momentum propelled them over the hosting Terriers.

Wagner started playing fierce defense and caused problems for St. Francis throughout the final 20 minutes of play as the Terriers field-goal, free-throw, and three-point shooting percentage all decreased dramatically in the second half.

Wagner on the other hand shot substantially better in every category in the second half. Field-goal shooting was up 10 percent, free-throw makes went up 24 percent, and three-point conversions increased by 30 percent.

“Basically we didn’t have a point guard for most of the second half,” said St. Francis head coach Glenn Braica.

“Basically we have four guys injured and I needed to play point guard,” said senior SFC swingman Stefan Perunicic. Perunicic fouled out with 1:45 left in the game.

Another problem was how Wagner shut Terriers live wire Travis Nichols completely out of the game. Nichols missed his only shot and committed three fouls.

“Nichols is a good player, we just game planned for him like he was one of the best players and we know he is,” said Wagner guard Tyler Murray.

The difference in the game was Wagner’s ability to capitalize on St. Francis’ many miscues, especially in the second half. Wagner scored 28 points off 23 Terrier turnovers compared to St. Francis who scored only six points off 11 Seahawk turnovers.

Tyler Murray, Wagner’s 6’5” senior shooting guard, fueled the Seahawk’s second half surge with 11 points off four-of-five attempts after knocking down all three long-distance shots. Murray finished with 19 points total in the game. Teammates Jonathon Williams and Kenneth Ortiz chipped in with 11 points each.

Perunicic had a team-high 16 points for the Terriers as usual starter, Akeem Johnson, assisted with 13 points of his own. Freshman forward Jalen Cannon narrowly missed posting his third consectutive doube-double after his 11-point, nine-rebound performance.

Despite out-rebounding Wagner 35-21 in the game, St. Francis lost its second game against the Seahawks on the year. They previously played each other on Dec. 1, 2011 when Wagner thumped St. Francis 90-50 at home in Staten Island.

With the win, Wagner improves to 6-1 in NEC play on the year. St. Francis falls to 5-2 in NEC play. The Terriers have not lost to any other conference rival besides Wagner so far.

Earlier this season the Seahawks snapped a five-game losing streak agasint the visiting Terriers with a commanding 90-50 victory in Staten Island.

St. Francis has won four consectutive contests after defeating Monmouth, 81-64, on Jan. 12 and Fairleigh Dickinson, 62-51, on Jan. 14 to improve to 5-1 in Northeast Conference play for the first time since the ’00-’01 season. The Terriers also improved to 4-2 at home this season.

St. Francis had five scorers in double-digits in the victory over Monmouth for the first in three years (11/22/08; vs. Hartford). With that victory, the Terriers are now a perfect 4-0 on Thursday night’s.

SFNY is averaging 77 points per game over their last five contests and are shooing 47 percent from the field and 80 percent from the foul-line during the stretch while outrebounding their opponents by an average of 8.0 boards per game.

Cannon is now 6th on the circuit in rebounding (7.5 per game) and is fourth in offensive boards per game (3.41). The power forward is averaging 10.6 points and 9.4 rebounds since being inserted into the starting lineup on New Year’s Eve against Army. St. Francis is 4-1 since then.

Senior forward Stefan Perunicic is averaging 16.8 points over the last five contests and is shooting 49 percent (19-of-39) from three-point land during that stretch. Perunicic has risen to 14th in he league in scoring (13.2 ppg) and now second behind teammate Ben Mockford in 3-point field goals per game. Mockford is averaging 2.88 treys and Perunicic is connecting on 2.76 per contest. Perunicic is the NEC’s active leader with 254 long-range bombs.

Sophomore point guard Brent Jones came up big for the Terriers against Fairleigh Dickinson after starting point guard Justin Newton left the game in the first half with an ankle injury.

Jones scored a career-high 15 points on 4-of-7 shooting and converted all six of his free-throw attempts. Jones is averaging 11.6 points, 4.0 rebounds, and 3.2 assists over his last five games.