Home /Sports/ST. FRANCIS FALLS TO LIU IN BATTLE OF BROOKLYN, 66-53 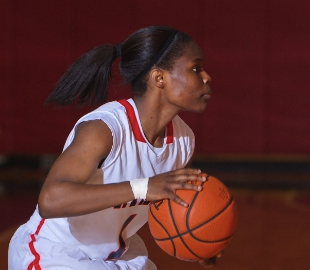 Palmer made he presence known early and ofter, scoring 11 points in the first half and grabbing four rebounds. Palmer finished the game with six rebounds and a pair of assists.

LIU’s bench also played a major factor in the game, outscoring the Lady Terrier reserves, 25-9, including 16 by Cleandra Roberts.

The two will meet again on Thursday, Feb. 15 at 7 p.m. in Brooklyn Heights.

3:34 – After another official timeout, the Lady Blackbirds are leading 64-46.

First Half Recap:
The Lady Terriers are locked in a close game, being down by only one point at the half. St. Francis was up by as much as six points but LIU would storm back, going on a 9-2 in the final minutes.

Forward Sarah Benedetti is the leading scorer for St. Francis right now with 10 points, shooting 2-3 from long range and 4-5 overall.

Jasmin Robinson is controlling the tempo of the game for the Lady Terriers, scoring 7 points and dishing out 2 assists.

Despite the 9-2 run at the end of the first half, St. Francis’ defense has been stifling as LIU is shooting just 40% from the field in the game.

LIU has taken advantage of some sloppy play in the game, scoring 14 off of 11 St. Francis turnovers.

4:15 – The block by Jessica Kaufman leads to a fast break layup by Jasmin Robinson. Lady Terriers up 27-24.

6:20 – Lady Blackbirds try to pressure Jasmin Robinson but she finds Sarah Benedetti for the breakaway layup. SFC up 25-21.

7:33 – Ebony Davis makes the layup with the contact for LIU as the free throw awaits. Lady Terriers up 21-20.

15:53 – The lady Terriers are up 10-5 early in the game thanks to back-to-back three pointers by Sarah Benedetti and Jasmin Robinson.