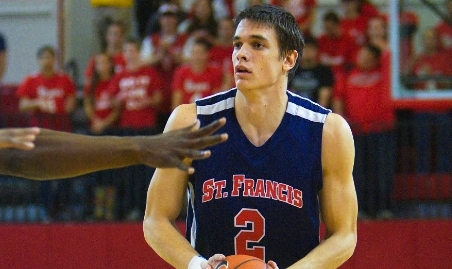 Brooklyn Heights, N.Y. — St. Francis College senior Stefan Perunicic had a team-high with 14 points in the 66-49 victory over Brown on Thursday.

Game Recap:
The Terriers of St. Francis College led the visiting Bears of Brown 28-20 at halftime then pulled away in the second half to win by 17 points in blowout fashion.

Forwards Akeem Johnson and Jalen Cannon proved to be the spark the Terriers needed as they combined for 20 points and 15 rebounds.

Guard Sean McGonagill was outstanding for Brown as he scored a game-high 19 points and had four assists in 36 minutes of play.

Brown’s lack of a second scorer was their downfall as McGonagill was a one-man-show for most of the game, Dockery Williams was the second leading scorer for Brown with eight points.

Much of the game suffered due to whistle-happy referees who called 33 personal fouls in 40 minutes of play.

Their next home game is a showdown agasint North Eastern Conference rival Quinnipiac on Thursday, January 5 at 7pm.

———————————————————–
FINAL: SFC 66 – Browns 49
The crowd applauds for their home team’s players as Head Coach Glenn Braica substitutes his starting five out for reserves with just over two minutes to play in the game as St. Francis controlls a twenty-plus point lead after another three-pointer by Perunicic.

Cannon continues to be the Terrier’s x-factor off the bench as the freshman forward has 10 points and a team-high nine rebounds thus far.

Second half starts with McGonagill hitting a three-pointer for Brown as St. Francis’ Ben Mockford responds with a basket of his own to give the Terriers a seven-point lead.

Despite Brown’s deficit point guard Sean McGonagill has proved to be a constant threat as his smart decision making and scoring ability continue to be a problem for St. Francis.

6’6” freshman forward Jalen Cannon has had an immediate impact for the Terriers as he leads the team with five rebounds and one blocked shot.

Both teams start off sloppy shooting just 33.3% from the field as the Terriers lead 6-3 after five minutes of play.

St. Francis tweaked their starting line-up for this game and went with a bigger front court as 6’8” sophomore Matt Milk and 6’6” junior forward Akeem Johnson get the start.

The Terriers of St. Francis look to rebound against the Bears of Brown after St. Francis lost their previous game to Norfolk State 84-74 on December 23.

The last time the Terriers and Bears squared off was last season on November 24th in Providence, Rhode Island where the Bears were able to edge off the Terriers by a slim 67-63 victory.

Brown has dropped four of their last five games after starting the season with a 4-4 record.