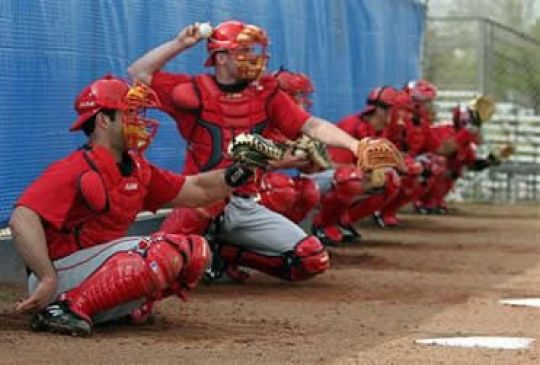 The snow is melting away. Football season is over with. The lawnmowers, rakes and the tarps are coming off of the fields. This can only mean one thing, MLB Spring Training is underway!

After an off season that saw some of the most lucrative contracts in baseball history, it’s once again time to get back to playing the game of baseball.
With pitchers and catchers for teams reporting to camp at the start of the week and position players reporting at the end of the week, the ultimate goal is set.

With the start of spring training, all teams have that one goal, win the World Series. It all starts with getting back into playing shape and getting your routines down.

This offseason we saw middle relievers and set up men get paid nicely.

Joaquin Benoit, now with the Detroit Tigers signed a contract for 3 years-16.5 million dollars. Scott Downs of the Anaheim Angels signed a deal worth $15 million over 3 years.

But perhaps the biggest set up man signing was the Yankees signing Rafael Soriano, formerly of the Tampa Rays. Soriano signed a contract for $35 million over 3 years.

There were clear cut winners and losers of this offseason.

Boston Red Sox- Trading for 1st baseman Adrian Gonzalez bolsters that lineup tremendously. It fills a void at 1st base as Kevin Youkilis moves over to 3rd. They also signed the top Free Agent outfielder, Carl Crawford to a $142 million dollar contract to play Left Field. These two men give Boston one of the best offensive lineups in baseball

Philadelphia Phillies- The mystery team in the Cliff Lee sweepstakes that won. Cliff Lee joins Roy Halladay, Roy Oswalt and Cole Hamels forming the best rotation in the National League and possibly in all of baseball.

New York Yankees- It’s hard to call the Yankees losers after they re-signed Derek Jeter and Mariano Rivera, lefty specialist Pedro Feliciano and free agent set up man Rafael Soriano. But they didn’t sign Cliff Lee after much speculation that they would do so. They also didn’t get Carl Crawford. With the back end of the rotation having many question marks in it, they need to rely on that bullpen to compete with the Boston Red Sox

Tampa Rays- After winning the AL East this past season, they lost Carlos Pena, Matt Garza, Rafael Soriano and Carl Crawford to trades and free agency, it might be a 3rd place finish in the AL East for the Rays. Even with Johnny Damon and Manny Ramirez on board.

Anaheim Angles- After failing to sign Carl Crawford despite being an early favorite to sign him. They instead traded for Vernon Wells and taking on an $86 million dollar contract from the Blue Jays. Texas signed AL MVP Josh Hamilton to an extension, so the Angels will need to scratch and claw to win the AL West away from the Texas Rangers

The San Francisco Giants are looking to repeat as World Champions. The Red Sox and Phillies are the two teams who are favored to win it all this year. Get the cracker jacks ready because here comes the 2011 Major League Baseball season!