SOMETHING STRANGE IN THE NEIGHBORHOOD 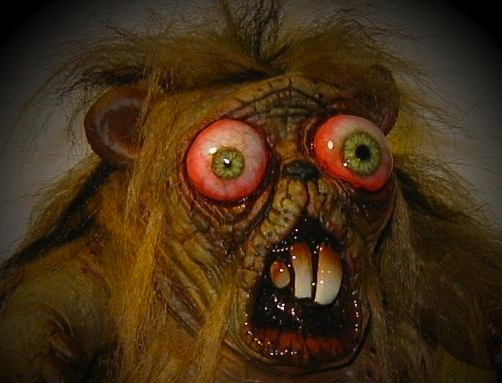 No one knows what St Frankie is exactly or how he got into the college library in the first place, but he is causing quite an uproar among the Order of Franciscan Brothers. frankie
No, it’s not Prof McSherry after Scotland gets beat at soccer — it’s St. Frankie all scrubbed up and looking good for the cameras
“The grotesque beast is nothing but a menace,” said Brother Edward Wesley. “He is destroying the sanctity of St Francis College and we will no longer stand for such debauchery.”

Even though St. Frankie is only 3 feet tall, he leaves quite the path of destruction. Since his arrival, the monster has laid claim to the back of the library and has been using pages from the library books to create his bedding.

Other than his literary vandalism, students and staff complain about the pungent musk that emanates from his living area.

“It’s disgustin’! It smells like vomit and rottin’ eggs down here! How am I sa’possed to eat?” said SFC junior Gino Donarelli.

Classes grind to a halt when St. Frankie runs up and down the halls flailing his arms like a mad man and screeching at the top of his lungs.

Students are on edge praying that he won’t barge in ripping the sheet from their hands and filling in the space marked ‘Do Not Write In This Space’ with a permanent marker. Students with written exams aren’t any better off since he will simply tear it up before the student’s tear filled eyes.

St. Frankie’s worst offense was during the April 2009 Career Fair when he came running in with an armful of urinal cakes and began throwing them at attendees and visiting organizations.

For the Franciscan Brothers, it was the straw that broke the camel’s back. “Using the fern in my office as a restroom was one thing, but throwing urinal cakes was quite another! He has to go,” said Brother Wesley.

As of now, the Brothers are deciding on what to do with St Frankie, but there are some that enjoy his antics. “Personally, I can’t get enough of that little scamp,” said Biology Professor Walter Blenkinsop. “You have to see when he drinks all the chemicals in the chemistry lab, he’s a riot! Arsenic makes him real gassy, too.”

SFC Chairman Dugal Brenahan has a place in his heart for the college’s furry friend. He is even considering making him the school’s official mascot. “The way he jumps off tables and tumbles around on the floor, St. Frankie is a born performer! I might just give him a t-shirt bazooka to use at home games, what can possibly go wrong?”