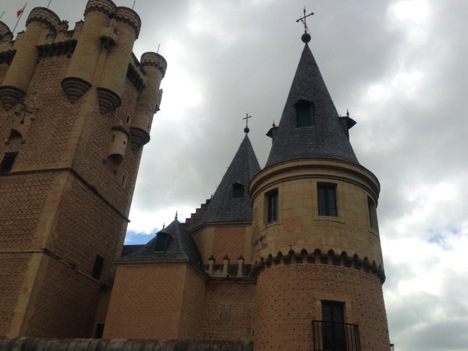 During the months of May and June of 2013, I had the opportunity to participate in the St. Francis College Faculty-led Study Abroad Program in Segovia, Spain with Dr. Sintia Molina.

I went with eight other students from St. Francis College. This trip was the first time in Spain for many of us, myself included.

Segovia is a beautiful town in Castilla y Leon in central Spain, just fifty kilometers outside of Madrid, known for its art and architecture, and the famous Roman aqueduct that runs through the town.

This study abroad experience was an important one to all of us because we truly felt as though we learned about the differences of cultures and language, as well as understanding the perspectives of someone in another country. It was an immersion program in that we were surrounded by the language and culture and therefore we were able to learn these things in a direct way.

It gave us the opportunity to practice our Spanish language and our knowledge of the culture, as well as fostering relationships with our host families as well as the other students.

After going through customs, we took the bus into town, and then we got off in front of a beautiful Roman aqueduct, built by the Romans in 200 B.C.E that now serves as a gathering point for locals and tourists alike, and also continues to supply Segovia with water.

The Centro Horizonte Cultural, or Cultural Horizon Center is the school where our classes were held. Dr. Molina taught Spanish language and Dr. Ricardo D’Augusta taught civilization and culture of Spain.

Every day when we went to these classes, we learned something new about Spanish language and culture that we were able to add to our knowledge and that contributed to our curiosity about different aspects of Spain.

We also took many educational excursions. For example, in Segovia we went to the Alcazar Castle.

The Alcazar of Segovia was the residence of many kings and queens of Spain, including two of the most famous royal figures, King Fernando of Aragon and Queen Isabel of Castilla.

In Madrid, we visited the Palacio Real (Royal Palace) with Professor Molina.

We looked forward to visiting parks, churches and museums, such as the Catedral Moderna and the Museo del Prado, as well as the Museo del Arte Contemporaneo Reina Sofia and the Parque Retiro, which is the major park and meeting venue of Madrid.

Another one of our excursions was a five-day trip to Andalucia. We went to the beautiful cities of Córdoba, Sevilla and Granada. Sevilla is especially famous for flamenco dancing.

The flamenco show taught us about the importance of music in Spanish history and the arts in Spain.

After we had been to Sevilla, we continued to Granada. We took tours of the Alhambra, the residence of Moorish kings in Spain. This taught us about the influence of changing religious empires on the culture of Spain

We continued to take excursions through small towns, such as a visit to the Royal Glass Factory in La Granja, a village outside of Segovia.
Many of us plan on returning to Spain because of the wonderful experiences from studying abroad.