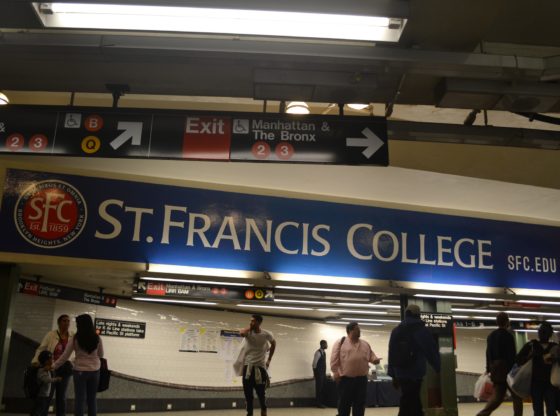 The faces of SFC students have expanded far beyond the doors of Remsen Street.

SFC’s previous advertising campaigns consisted of just a message, no student involvement and no eye-catching pictures.

Over the summer, Linda Werbel, the Vice President for Government and Community Relations, and Marie Zachary, Director of Recruitment Marketing, put together a campaign with the new advertising agency, CDHM. CDHM is a Connecticut based small advertising agency.

“It has been a great experience working with them so far, they listen, they are very attentive to what we tell them and are more than pleasant to work with,” said Zachary.

The two of them knew in the visual world we live in today, SFC needed something new and powerful.

You can see the new SFC ads in the subway, malls, billboards, bus shelters, N.J. PATH, Staten Island Ferry, a few digital campaigns and social media as well as print campaigns in various College magazines on a national level and in newspapers across the five boroughs.

Earlier this month, Brooklyn has once again, has become a home to professional sports with the opening of the Barclays Center. With the venue only walking distance from SFC, the marketing team used this to their advantage.

“Atlantic Terminal’s Domination Package- runs throughout the entire station—with the grand opening of the Barclays Center—the energy is very positive there and the flow of people have increased in numbers with concerts such as Jay-Z and Barbara Streisand —its just such a great demographic,” said Zachary.

With SFC fall Open House quickly approaching on Oct. 28; the basis of this new advertising campaign revolves around drawing future students to the fall event.

Senior Monica Richardson said, ” I am very excited about seeing the new SFC ads because they are students that have gone or currently go to SFC and it makes students feel that the College notices them as individuals and not just a number and that they are paying attention to us—it lets people know we are a real school even though we are a small school with real students—I think it’s fantastic.”

These ads will run until Open House with the next campaign targeting the transfer student. In the spring, the cycle begins again with ads for the spring Open House varying in messages, yet keeping consistency.

If you are wishing to be involved in the future SFC ad campaigns, Werbel said, “There will definitely be future opportunities for students and alumni to be involved in SFC advertising. We are always looking for people to profile on the web-site and in future advertising who represent the diversity and success of our student body and alumni.”

However, the new and improved SFC ads are not just on billboards but, you can hear the open house ads on the radio. SFC ads can be heard on Z100, and this year the marketing team is furthering their campaign by working closely with Z100’s Jingle Ball. SFC is going to have a table and giveaways at the pre-Jingle Ball event.

“It will be just another way to be out there—reaching out to the college-age population,” said Zachary.

The Small College of Big Dreams has been SFC’s slogan for over 10 years. But, if you see some of the ad’s from the new campaign the famous slogan has become snappier to the consumer. With much evaluation and research the team decided to improve the infamous tagline to “Small College. Big Dreams.”

“You are not changing the tagline, you are creating the same feel with a different twist—it is the same meaning but, more powerful,” said Zachary.

With the advertising world constantly being empowered by improvements in technology and media, it is no longer a simple task to catch the attention of the reader.

SFC has been a small private colleges for decades, however, the power of these marketing campaigns have truly put the small college on the map. “We are tapping into all the venues where we know we can make an impact,” said Zachary.

“SFC wants to resonate more with prospective students and by putting the current SFC students out there in the ads and by telling their story,” I think it’s made an impression,” she added.

This semester, SFC has the largest freshman class since the College opened. This is definitely due to the power of the advertising campaigns, as well as the welcoming feel prospective students get when they walk through the doors of SFC.

Upperclassmen fear that the growing numbers will take away from the advantage of being a small college.

Zachary disagrees, ” Even with the increase in student population—I don’t think that the perception will ever change—we offer a sense of community , with great support services, and as for advertising, it’s safe to say that the brand has come alive.”

“Through surveys and findings we have realized who we are as a College. Students say ‘SFC is like a family’—the student feels comfortable to talk to a professor and the fact is that our student-faculty ratio is 18:1 — the opportunity to engage with your professor is outstanding,” said Zachary.

Junior Amber Ferguson said, ” I think the ads are a ‘push’—to tell people to go to college and it’s not that expensive you don’t have to go to NYU to get your dream job—you are getting a great education for a cheaper cost.”

SFC, has created an image and brand that’s accompanied by the College’s logo— when you’ll see it on a sweatshirt, an ad and even on a billboard. ” That is what’s so great about brand recognition—the more you are out there, the more you get recognized.

“Media is huge—can’t just use one source of media. For example, it can’t just be print, social media or a billboard, it must be an integrated campaign, with a consistent message that allows for everything to come together enforcing the brand identity,” she added.

The ads now tell a story of what SFC is truly about, the success and opportunity of every student.