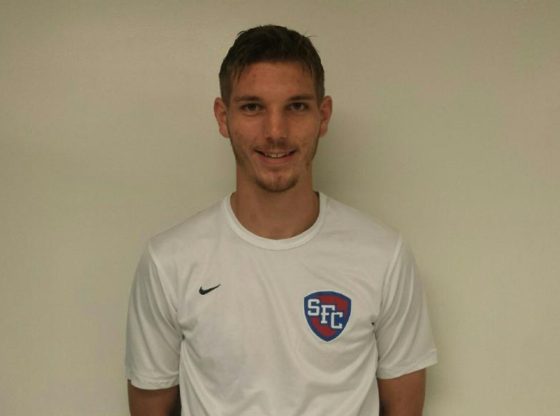 Last year defender Fabian Suele made the commitment to play soccer at St. Francis College coming all the way from Frankfurt, Germany. Anxious at first as anyone studying overseas would be, Suele quickly acquainted to life in the United States.

Adjusting to a new country as well as teammates was not the easiest thing at first, according to Suele. The now sophomore further stated, “It’s always hard to find a connection with new people. Fitness level is very different here. We do a lot more running here, and definitely do more. It’s crazy. I remember the first two weeks that I had arrived in Brooklyn; I wanted to go back to Germany. I love it here now it was worth it. I can’t imagine doing anything else.”

Suele always thought about studying in the United States. Beforehand, he studied in Germany for a year, and discovered that he didn’t like it. When SFC men’s soccer head coach Tom Giovatto contacted Suele to play soccer and study at the school, he knew that’s just what he wanted to do.

Suele also emphasized that Germany and the United States are completely different. In Germany, they do not combine playing a sport while studying. He would of had to play on a separate club team and study at a college not affiliated with the club team had he remained in Germany.

Suele was first intrigued in soccer when he was three years old. His father used to play soccer, and his brother currently plays professional soccer in Germany. Although he grew up in a soccer family, his father never forced him to play. Suele explained, “My father wanted me to be good in whatever I did and told me to put my best effort in anything I pursued.” His brother is also an inspiration to him. The diligent defender wishes that one-day he could play as well as his role model. Soccer just came naturally to Suele at a very early age.

Along with anything else, soccer also has its disappointments. The sophomore expressed his feeling of disappointment as he expressed, “When I was fifteen years old, I had a cup game in Germany which was pretty important. We lost in the penalties, and I was so upset because we had a huge chance to advance onto a national tournament.”

Soccer can also be a satisfying sport. Suele loves soccer as a team sport. He enjoys working with his teammates in order to win games. Winning the NEC championship last year was the best feeling for Suele. He is still very joyous about last year’s victory, and is set to defend the title.

Although coming to the United States was the “Best thing that ever happened” to Fabian, he hopes to acquire his masters degree in either finance or business management in South America. Suele continued, “I plan to do that because I was fortunate to enhance my English for three years, so now I want to learn Spanish, which will be advantageous when applying to the bank I want to work for back in Germany.”