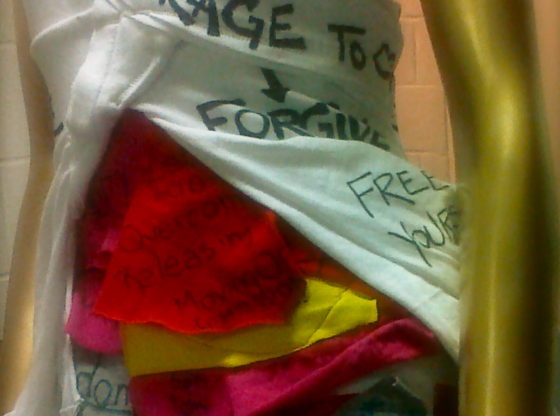 ‘Gye Nyame’ originated in Ghana, West Africa and symbolizes the supremacy of God, and though this is not a faith-based organization, they state “our successes are not accidents, but a result of something bigger than us.”

According to the Gye Nyame Empowerment Project, this non-profit organization is devoted to bringing together high school girls of color in the New York City area “and emphasize personal development, self-love and representation of the Black woman… recognizing, examining, and celebrating issues pertaining to people of color.”

Akua Soadwa is the Founder and President/ Director of this project. After pursing a Masters in Urban planning, Design and Development from Cleveland State University, she decided to created her own local non-profit after working and learning from others.

In October of 2006, Soadwa began her own organization. In February of 2007, GNEP was officially incorporated as an organization in New York State.

Many volunteers supported Soadwa in starting her organization. She has a great team of board of directors that include Panin Soadwa-Humphrey as Vice President, Karkra Soadwa-Gyambibi as Secretary, Kwasi Gyambibi as Treasuer, and PR & Marketing Strategist Danita King.

Over one hundred high school girls of color attended this event for a day of entertainment and empowerment workshops.

The day began promptly at 9am, with registration and breakfast followed by West African Dance performed by Dionne Monsanto. Following this, there was an introduction to the program and a transition to the workshops.

Three workshops were being held in the classrooms here at St. Francis College.

The duration of each workshop was a little over an hour, having each group go on to the next one, having the young girls experience their time with the inspiring women of the organization which included Queen Afua, Kerika Fields, Shelly Martin, Janine Bell, Joy Conway, Shawnee Benton-Gibson, Andrea Cleveland, Mekaelia Davis, Anzala Azolie, Monique Fortune, Lita Lewis, Imani Farley, Andrea Day, Lisa Brooks, Damali Elliot, Monica Dennis, and many more.

Lunch was served after two workshops, and then followed by another workshop. After lunch was the pinning of The Forgiveness Dress, conducted by Sallome Har, which allowed the girls to write a person or experience they were trying to forgive within 12 months on pieces of fabric.

Each year more fabric is added until enough material is present to create the first “forgiveness dress” which will be designed by Born as a Raggamuffin.

Following The Forgiveness Dress, there was an “Out of the Box Series” which consisted of a few 20-minute mini-workshops that covered Hidden Images in the Media, 21st Century Beauty, Analog Girl in Digital World, and Girl Like Me.

The girls were allowed to choose 2 of the 4 mini-workshops which were conducted by Michaela angela Davis, Raeven Western, Geneva S. Thomas, Lucinda Cross, and Stacey Muhammad.

The rest of the day was filled with entertainment, and a closing ceremony. The ceremony ended at around 7 pm.

There were also awards presented by the organization including the Andrea D. Brown Book Scholarship, Strength, Courage and Wisdom Award, and My Sister’s Keeper Award.

GNEP Founder Soadwa stated “ We are thrilled to introduce a scholarship and other awards as we acknowledge girls and women of color who are empowering others and impacting the community in a positive way.”

This well organized and passionate group has created something truly valuable to give back to the community.

This organization with motivating leaders, provide the girls with confidence, awareness, and tools to a successful future.

GNEP has some other programs such as Sista-2-Sista Chat Sessions, Get Lifted Mentorship Program, Real African Women, and also plans to launch a Brotha-2-Brotha Youth Summit in 2011.

For further information on the programs, S2S, and people involved, please visit http://www.empowermegnep.org

JUST GOOGLE IT!
NEVER BELIEVE IT’S NOT SO