SIMPSON MAKES A SPLASH AT SFC 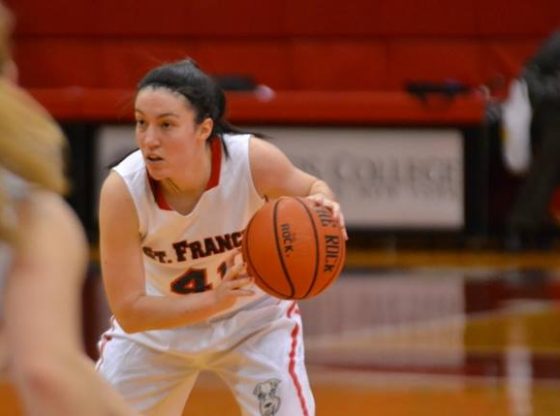 St. Francis women’s basketball star Eilidh Simpson has had a sensational 2013/2014 season with the Terriers and is truly enjoying her college experience here in Brooklyn, New York.

The Australian born junior guard attended Wesley College in her hometown of Melbourne, Australia before making her way to America three years ago.

“It was always my dream to come over to America and play college basketball, and New York City was very appealing when I was talking to a lot of college coaches and trying to base my decision on where I wanted to go,” said Simpson.

Simpson’s basketball career began when she was only five years old.

“It all started with a group of friends, one night a week we would play and we would practice. Then it became every day during lunch time at school and it just grew from there,” she explains.

Her passion for basketball grew so large that it eventually brought her to where she is now, playing college basketball.

So far this season, Simpson has scored a total of 252 points and is averaging 14.0 points per game, while playing an average of 33.6 minutes per game.

She has a free-throw percentage of .786 and is averaging 3.9 rebounds per game.

In the 18 games Simpson has played this season, she has gotten a double-double four times.

Simpson scored 24 points in both the UMASS-Lowell and Lafayette games, 23 points during the Mount St. Mary’s contest, and 22 points during the Central Connecticut game. She has only totaled in the single digits six times this season thus far.

Simpson is having a strong season overall, but believes that every basketball player has their strengths and weaknesses.

Simpson hopes to be a leader for the team now that she’s getting older and is one of the veteran players, and tries her best to contribute to the team in every way.

Although she has had many basketball coaches over the years and looks up to all of them, there’s one coach from back home in Australia that Simpson says is her role model.

“Coach Mitchell played college basketball and he really helped me get over here to play college ball. I still speak to him all the time. He’ll watch my games; he actually came over to America about a week ago and was able to catch one of my games,” Simpson stated.

In fact, Coach Simon Mitchell isn’t the only one who comes from Australia to watch her play the sport she loves. Simpson’s dad usually comes during Thanksgiving break to catch a few games, and her mom is set to come in about three.

Simpson also receives a lot of support from her friends back home, where they watch many of the games online.

Coming from Australia to New York, Simpson faced some challenges. One that she feels to be the biggest challenge is adjusting to the weather.

“I’ve never been so cold in my life. I’ll look on my phone and I’ll see it’s 100°F back home right now, and I’m lucky if its above zero here,” said Simpson.

For the duration of the summer break, Simpson usually goes back home to Australia, but says she is truly enjoying her dorming experience so far at SFC.

“I love my teammates and to live with them is fun. We all have fun together, we have movie night together, we’ll cook together, and we do practically everything together,” she said.

When Simpson has a day off from both school and basketball, it usually consists of her relaxing.

“When I finally have a day off, I’m so exhausted. I normally lay in bed and watch One Tree Hill, or have a movie day with my teammates,” says Simpson.

Simpson is finishing her third year at St. Francis College and is majoring in health science with a minor in sports management.

Although she is working on getting a college degree, her mind is focused on basketball.

“To be honest all I can think about right now is basketball. My dream is to get a contract over in Europe to play professionally over there and keep traveling the world playing the sport I love,” Simpson explains.

If all else fails, Simpson laughed and said, “My favorite food is Chipotle, I love it. We definitely need a Chipotle back home in Australia. If I have nothing to do back home I’ll open one up.”

But before she leaves to play professionally or open a Chipotle abroad, Simpson will continue making a name for herself in the world of basketball and leaving her mark on St. Francis College.