Shifts in Pre-Law’s Political Arena: Filocomo Withdraws from the Race, Campaigning for Secretary of Society & SACOR Secretary Kicks Up

Home /News/Shifts in Pre-Law’s Political Arena: Filocomo Withdraws from the Race, Campaigning for Secretary of Society & SACOR Secretary Kicks Up 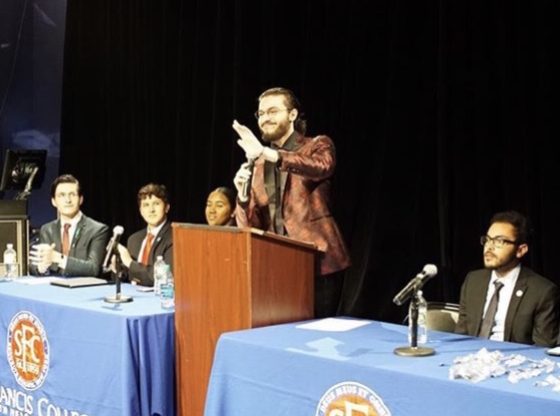 There have been major shifts in the political landscape of SFC’s Pre-Law Society this past week. Candidates have begun crafting their campaign platforms, reaching out to members, and the excitement is kicking in and the races heating up. Yet, one race, that of the Presidency – the one under the spotlight, with all eyes upon it – just ceased to be competitive.

Frank Filocomo, the candidate who was challenging incumbent Nicholas Vitrano, has withdrawn from the race, ensuring a second term for President Vitrano.

A self-described realist, Filocomo simply saw early on that he didn’t have the support to be elected, and didn’t think running a race he knew he wasn’t going to win would be worthwhile. With that, he chose to suspend his campaign.

His “Law First” agenda, emphasizing an utterly entire focus on the law, and just that, involved casting aside political discussions hosted by the society, which members enjoy. In this regard, the plans weren’t well received. That being said, it wasn’t what his agenda included that may have steered members away – it was what would be sacrificed in the making.

Filocomo still stands wholeheartedly with his message, and is looking to see how President Vitrano & Vice President candidate, Stefano Forte – both of who are now unchallenged and welcoming a victory – will include some of his ideas. “I’m hoping that they heard what I had to say and that they adopt some of my message,” he stated.

Specifically, he hopes to see more access to the courtrooms right here in Brooklyn Heights, the start of LSAT Prep, and more focus on the Mock Trial Committee, where he will remain as Chairman, honing his leadership skills for a possible future run – which he isn’t ruling out.

Furthermore, Filocomo may not have to wait long to see aspects of his agenda included in how the society is governed. President Vitrano has already initiated measures to take the society down a more moderated version of the Law First agenda, exhibiting his willingness to compromise.

“Frank’s theme utilized during his campaign is of the utmost importance to me alongside the Pre-Law society,” Vitrano stated. For starters, the President and the current Executive Board has scheduled a visit from New York Law School to take place on March 25th. Representatives from the school will be coming to SFC to talk directly with the Society.

Still – some advice for those members craving a taste of the “Law First” agenda promised by Filocomo: “just go to mock trial,” he says enthusiastically. A setting of pure law continues to thrive under Filocomo here, where it’s practiced in its raw form.

With the election for the Presidency ceasing to be competitive, two races are left where candidates face a challenger: those being Secretary of Society & SACOR (Student Assembly Core of Representatives) Secretary.

Rachelle Mejia is the Top Advisor to the current Secretary of Society, Natalia LaMorta, and is looking to make the step up to the position she is seemingly in-line for, as LaMorta will be graduating this Spring, leaving the seat vacant.

Mejia is undoubtedly qualified for the title as Secretary of Society. As Top Advisor, she has taken on administrative roles, making her familiar with the position, and well acquainted with its demands. She has structured her campaign on making the Society more organized, and with that, arranging more interesting activities & events for members, as well as increasing the membership by attracting more people.

“My campaign is based on how active we can potentially be as a society, and how we are able to provide another year of excellence not only for St. Francis, but for future law school students within our community!” Mejia’s enthusiasm for the society shines through her statement here, and her ambitious drive, along with her qualifications, makes her a strong candidate.

Yet, while she may have her foot-in-the-door for the position, Mejia will be facing challenger, Gabby Smalls, Chairwoman of the Pre-Law Journal, who is arguably just as qualified, given her current leadership position.

Smalls also has big visions of what the Society will be like with herself as Secretary. Her plans revolve around making the group “a more united front,” and for Smalls that entails making sure members are aware of upcoming events by sending out calendars, creating more social events, and securing LSAT prep for those set on attending law school following graduation.

With her well thought-out agenda, the Chairwoman surely has the potential to be a successful Secretary of Society. Thus with two candidates as distinguished as these two ladies are, this race is bound to be closely heated.

Last, but certainly not least, is the race for SACOR Secretary, where two other excellent candidates are envisioning a bright future for the Society, and molding that into a campaign platform.

Rebeca Oliveira is making the reform of all the Society’s social media pages & organizing collaborative events with the Student Government Association (SGA) the focus of her campaign. Social media is vital for Oliveira because it is a platform of which prospective members can get an impression of what the Society’s about. One way she plans to do this is through weekly features on the membership on the Society’s Instagram page.

In regard to reviving the group’s social media pages, Oliveira stated that, “social media is the gateway to finding more people to join the society, so it’s important that all of the posts are well-cultivated and presentable.” Along with this, the candidate has plans to create digital & physical flyers advertising Pre-Law events, and work with SGA to have community events for the local area.

It’s evident that Oliveira’s agenda is bold, and consists of various new and exciting ideas that members can easily stand behind. However, she must face off against Ryan Elkassem, the Chair of the Debate & Discussion Committee, for the seat and for the opportunity to instill new policy.

Elkassem also has proposals for the Society if elected SACOR Secretary, and they are very collaborative in nature. The Chairman’s ideas include establishing a United Nations Association, which, in conjunction with Pre-Law, will schedule speaking events with Congress members, State Department officials, and the likes. Likewise, he’d like to set up the Civics Association, which would allow shared membership between other clubs, such as the History Club & Model United Nations.

With all that being said, the abundance of new, innovating, and exciting ideas for the direction of the Pre-Law Society is apparent, and regardless of the outcome, both candidates would serve as capable, creative, and respectable leaders.

Hence, only the members can go forth from here and choose the future they find the most suitable.