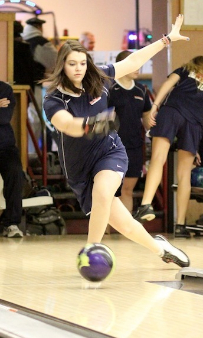 Chepelsky grew up in Rochester, New York and was in middle school when she discovered bowling.

Since then it has had a major impact on her life. At Bishop Kearney High School she was captain of the bowling team and successfully led the team to an undefeated season during her senior year.

She moved to Brooklyn Heights to become a Terrier in 2010. Chepelsky was the only person from her high school to join SFC.

Chepelsky felt the stress about leaving her hometown: “I was stuck between going to SFC and a local college at home. I wanted to go to a school with a strong film and broadcasting program but when I weighed my options I decided SFC was the best of both worlds.”

Chepelsky has enjoyed making friends and memories that she will treasure for the rest of her life.

“My favorite moment at SFC was this past January at Strike 10 Lanes. We were bowling to advance to the championship round and we were facing the reigning NCAA champs, University of Maryland Eastern Shore. It was a tough match and we battled the whole way. In the end we came up on top. I have never been more proud of my team.”

Chepelsky saw a major difference between high school and college bowling. The expectations are much higher.

“High school bowling was just five bowlers bowling two or three games but college bowling is much longer, much more competitive and more demanding in every aspect.”

For prospective high school students thinking about making the same choice for their future Chepelsky serves as a great role model: “If you’re willing to put forth the effort it is fantastic. This experience is something that is only offered once in a lifetime and it is important not to let such a great experience pass you by.”

With about fifteen hours a week of practice, finding time to keep up with her schoolwork can be easier said than done. The team competes in tournaments almost every weekend. The team has placed in the top five several times.

Right now she is focusing on the NEC championships, which will be held at Kutztown University on the weekend of March 24-25.

Chepelsky is a proud student-athlete at St. Francis College and has a bright future ahead of her. She has taken on a lot of responsibility and handled it all very well.