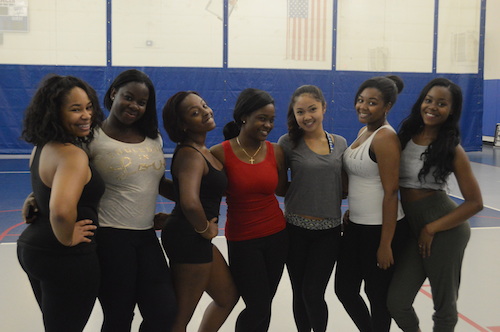 Camara and Warren-Kidd began tryouts Monday and continued the next day as they looked for new and talented dancers to join the team.

Camara was voted captain last semester and states that the dance team is very diverse, and she expects the upcoming dancers to make the team a number one priority with strong commitment and dedication.

Camara expects the team to improve in stamina, as they start to build the new team for the 2014-2015 school year, especially with new uniforms, now a beautiful blue with red SFC letters.

Camara also stated that body image is not significant in terms of a specific body type that a dancer must have, as long as the girls auditioning show dedication and passion.

“I take everything that I’ve learned and share it with the team, I was a cheerleader as well so I incorporate those skills…being on a cheerleading team was very strict and, you had to be dedicated and passionate in what you do, gradually I’d like to do it with this team,” said Camara.

The sophomore captain has been juggling schoolwork and dance since high school. Currently Camara is an intern and is determined to give one hundred percent to both the internship and team.

Kira Evans, a current member of the SFC dance team has been on the team since freshman year. Evans hopes that she can create long lasting friendships with the newly added dancers. Evans also believes that commitment, leadership skills, and fun are qualities that the girls auditioning for the team should express during the tryouts.

When asked what is to be expected of the new dance team this year, Kernie Falaise another member of the dance team said, “I just want us to do better and keep leading up to greatness”.

No experienced is required to audition or be a member of the dance team, anyone with gymnastic experience was welcome to show what they can do, however no experience in acrobatics was necessary.

The SFC Dance Team’s first performance will be during the first basketball game which starts in October. Practices start next week and auditions begin Friday September 12th.

WOMEN’S VOLLEYBALL PREVIEW: TERRIERS GO ON THE ROAD TO TAKE ON LAFAYETTE COLLEGE
DEATH TO THE DEATH PENALTY