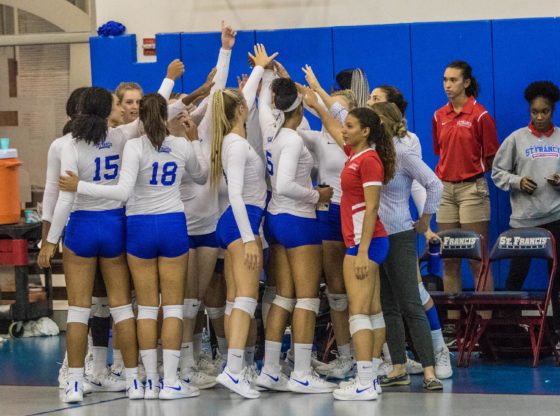 The St. Francis College (SFC) Woman’s Volleyball team was defeated earlier today by our Northeast Conference (NEC) rivals, the Long Island University (LIU) Brooklyn Blackbirds, in a score of 3 sets to 0 in their first “Battle of Brooklyn” game this season. This game was played at LIU Brooklyn.

Sophomore Hitter Vanja Miljacic led the game with 8 points and 8 kills with a total of 26 attacks.

Senior Nina Tiedt also contributed in this game as she finished with 2.5 points, 1 kill, and 17 assists (game high in assists for the Terriers).

This loss will be Terriers 6thstraight loss in conference play. The Terriers will advance to 5-16 (Overall record) and a record of 1-6 (NEC). They remain 7thplace in the Northeast Conference. Following this game, the Terriers will go on to play Sacred Heart University at home next Friday on October 19that 4pm and will have their rematch against LIU Brooklyn on November 2nd.