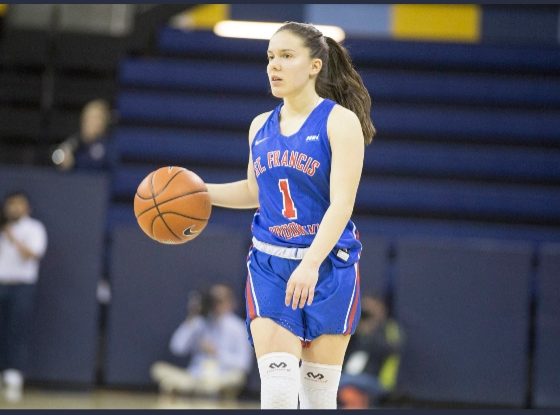 Saturday afternoon at the SEFCU Arena in Albany, NY, the Terriers defeated the Albany Great Danes 49-41 in their first of a three-game road trip to wrap up their Non-Conference schedule.

In the first quarter, only seven points were recorded. The Terriers scoring twice recorded four points while the Great Danes scoring once recorded three points. In the second quarter, the Terriers started with a 6-0 run taking the score to 10-5. In the last two minutes, with a good three-point shot from Patricia Conroy and a good jumper from Khepera Stokes, the Great Danes took a one-point lead at halftime, 14-15.

In the third quarter, both teams were head-to-back with each recording 13 points. The Terriers stormed the fourth quarter recording 22 points, limiting the Great Danes to 13 points. With 13 seconds left on the clock, Nevena Dimitrijevic took the Terriers to their largest lead and recorded the last two baskets of the contest with two free-throws. They took the contest 49-41.

For the Terriers, freshman guard Nevena Dimitrijevic finished with 16 points, six rebounds and landed six of seven free-throws in 40 minutes of play.

Next, the Terriers travel to Las Vegas as they take on Pacific at the South Point Arena on Thursday, December 19. Game tips off at 5 p.m. (PT)/8 p.m. (ET).