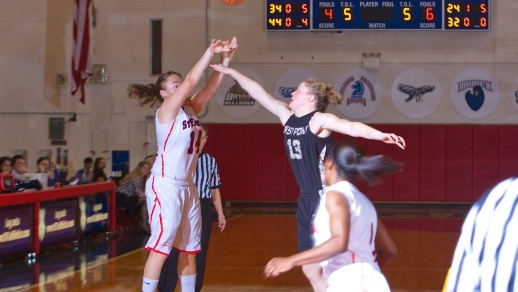 Game Recap:
The Lady Terriers posted two players in double-figures, shot better from behind the arc and the field overall than their opposition, possessed a nine-point lead at halftime, and still lost 49-46 to the visiting Mountaineers of Mount St. Mary’s on Monday.

St. Francis played great in the first half and led 31-22 at the break but saw their slim lead slip away as the Mount started the second half on a 9-0 run, squaring the score at 31 apiece. It took the Terriers over eight minutes to score their first basket of the second half.

Despite the heartbreaking loss, there was a bright spot for the Terriers. Freshman forward Jaymee Veney recorded her second career double-double, scoring 12 points while grabbing 11 rebounds in 29 minutes of action. Teammate Sarah Benedetti led St. Francis with 14 points on 5-of-8 shooting, draining 3-of-6 from downtown.

Guard Sydney Henderson scored a team-high 13 points for the Mountaineers, she only got two minutes of rest in the game. Kayla Grossett was the second leading scorer with 11 points.

St. Francis outrebounded St. Mary’s by a 41-28 margin but lost the turnover battle 22-14 as the Mount capitalized on the Terriers miscues with 18 points.

The game was won however in the second half on foul-shots. The Mountaineers converted 9-of-13 free-throws while St. Francis only sank 1-of-3 attempts.

The Mountaineers won the last seven match-ups against St. Francis including a 70-48 victory earlier this season on Dec. 5 when SFC traveled to Emmitsburg, Maryland.

In that game, freshman forward Jaymee Veney scored a career-high 17 points and pulled down a team-high seven rebounds in 29 minutes of action for St. Francis. Sophomore point guard Jasmin Robinson chipped in with 15 points (13 in second-half) and five steals. The duo combined to shoot 63.6 percent (14-of-22 ; 7-of-11 each) from the field.

The Mount’s Sydney Henderson finished that contest with a game-high 18 points, shooting 53.8 percent (7-of-13) from the field as teammates Mariah Powell and Kelly Guerriero assisted with nine points apiece. With the win, the Mountaineers got off to their first 2-0 league start since 2005-06.

St. Francis is 2-16 overall this season and 1-6 in NEC play after defeating Wagner 48-34 on Saturday. Robinson posted 13 points in the victory for the Terriers. The win over Wagner snapped a 13-game losing streak.

The Mountaineers (7-11 overall ; 3-4 in NEC play) enter this evening’s contest looking to snap a two-game skid as they lost to LIU Brooklyn, 69-45, on Saturday.

FOR THE LOVE OF THE GAME
GIANTS-PATRIOTS SUPER BOWL PREVIEW