SFC STUDENTS POISED TO TAKE ON THE FED

Home /News/SFC STUDENTS POISED TO TAKE ON THE FED 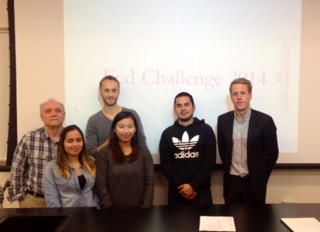 The St. Francis College National Fed Challenge team shared their presentation with fellow students last week before heading to the New York Federal Reserve this Friday to compete against teams from other colleges in the region.

The group, consisting of Phoebe Lee, David Lonnberg, Krystal Maldonado, Felipe Martinez and John Sundqvist, shared their views on the state of the nation’s economy, factors that contributed to it, as well as policies that could be put in place to encourage prosperity.

Mentored by economics professor Dr. Behrouz Tabrizi, the students were able to put forth a very informative presentation with sound, structured contents in just fifteen minutes.

In addition to this, they demonstrated a thorough sense of knowledge on the topics at hand as was evidenced in the Q&A section of the presentation.

The team appeared well prepared, and held a captive audience throughout the presentation.

The crowd was engaged, and became even more so when the team members were able to effectively answer questions directed at them in a manner that clearly showed their understanding of the topics at hand.

“I feel pretty confident in the work we’ve done,” stated team member John Sundqvist, “The only challenge though, is that the Fed will be releasing its quarterly reports on Thursday, and the competition is on Friday.”

Despite the fact that the team will have plenty of last minute work to put into their presentation in order to include information from these reports, they have shown that they are nothing short of capable to take on the challenge.