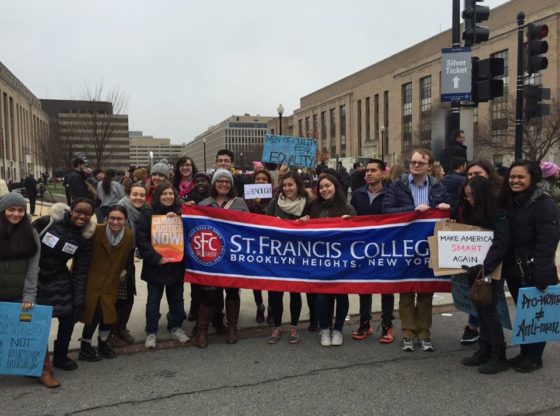 The Women’s Center at St. Francis College provided students with free bus transportation to the Women’s March on Washington on January 21st.

Twenty three students and staff members from SFC filled a bus to capacity early on Saturday morning, making the four hour trip down to Washington D. C. There, they marched with crowds numbering in the thousands.

The idea for the march started on a Facebook page after the election of Donald Trump as 45th president of the United States.

“The rhetoric of the past election cycle has insulted, demonized, and threatened many of us….” reads the Mission Statement of the march, “…we are confronted with the question of how to move forward in the face of national and international concern and fear.”

Quickly, the idea became larger than organizers had anticipated. Sister marches were held in over 600 locations, including areas outside the US such as Australia and Antarctica.

The largest march was the one in Washington, which drew over 500,000 people— more than double the 200,000 expected for the march. Celebrities such as Madonna, Amy Schumer, and renowned feminist Gloria Steinem also participated.

SFC students carried signs with quotes such as “I’m too worried not to be here” and “Men of quality don’t fear gender equality, and snapped pictures of clever slogans from other protesters.

“The Women’s March on Washington was a once in a lifetime experience,” said SFC Senior Tianna Grant, “It felt very inclusive and everyone loved each other.”

Dr. Sara Haviland led the group down to D.C. and was impressed by the turn out. “I found it inspiring to see so much student enthusiasm for promoting change and participation,” she said in a later email to participants, imploring them to do more in the future. The women’s center, Havilland said, would be looking for more initiatives and ways for students to participate in the future.