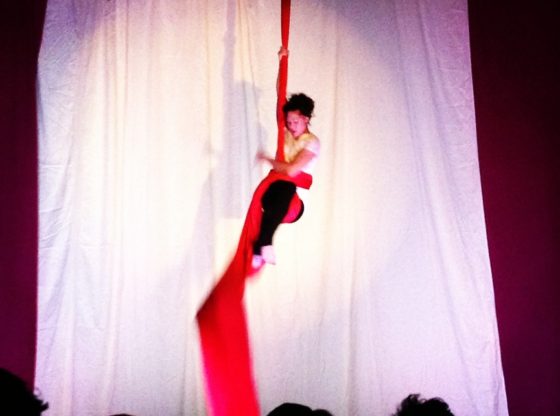 SFC Senior Marzena Bochnak spends her spare time soaring through the air and marching to the beat of her own drum.

Bochnak started performing on aerial silks—an artistic acrobatic dance style performed while hanging from a silk fabric suspended from the ceiling—in 2014 when she was 19 years old.

But the Queens native has been dancing through life as long as she can remember. “I officially started dancing when I was in diapers,” she told SFC Today.

“I’ve done many different types of dancing,” she continued, “Such as ballroom, tap, hip hop, modern, and ballet since a young age. And I thought that doing aerial silks would bring me to the next level.”

So Bochnak enrolled in Aerial Arts NYC, a dance company that specializes in circus performance and uncommon gymnastic dance styles.

She attends weekly classes, and even has her own aerial apparatus set up in her backyard for practicing her newfound passion for performing her aerial stunts. Since joining Aerial Arts NYC, she has broadened her dancing repertoire to also include aerial hoops, a similarly acrobatic performance that involves incredible strength and flexibility while twirling, twisting, and dancing on a hula-hoop suspended in the air.

Bochnak’s performances—along with those of her fellow dance company members—are quite a sight to behold, with dancers performing on silks, hoop, straps, and trapeze among other apparatuses. Her first show had a “feminist princesses” theme, Bochnak said, and each performer dressed up as a Disney princess. Bochnak designed and created her own costume and performed as her favorite female heroine, Ariel from the Little Mermaid, who was very appropriately named for Bochnak’s performance.

At the next show, she masqueraded as the Queen of Hearts, where her creativity again showed through in her homemade costume and unique dance routine. “That piece was about having fun,” she said, “It was supposed to be sassy. It fits my personality.”

In Aerial Arts NYC’s most recent production on November 5, Bochnak chose to take on a more serious theme. “That performance was about educating the public about how it feels to have depression and trying to reduce mental illness stigma,” she said.

Bochnak has found solace in her dance and exercise routines, and she thus chose to pursue a Psychology major and Personal Training minor at SFC to hopefully help others in the future. “Performing on aerial silks and hoop helps me express what I strongly care about in a beautiful and positive way,” she said.

She is also focusing on improving her “twerking at the club,” she joked.

Bochnak finds peace in her unique creative outlets and encourages others to think outside the box as well. She has decided to focus more on developing her aerial hoop skills for the time being and further expand her range in dance and circus performance.