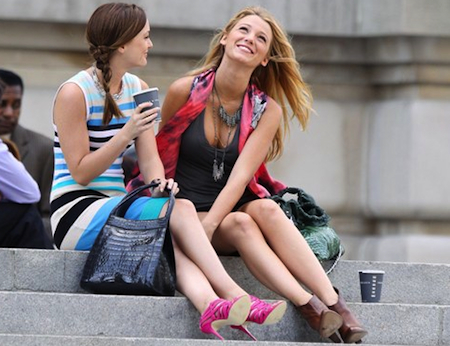 The cast and crew of the hit television series Gossip Girl filmed a hospital scene for one of their episodes at St. Francis College in recent days.

Occupying the second floor Volpe lounge, which is connected to the library, the Gossip Girl crew and the St. Francis student special events team successfully managed to allow students to move back and forth while productively filming their scenes.

Robert Oliva, director of special events, was in charge of making sure the students of St. Francis were able to walk in and out of the library while filming was in progress.

Although this was a new experience for most students, it isn’t the first time that an episode of Gossip Girl has been filmed on the St. Francis premises.

About a month or so, the Gossip Girl crew gave Robert Oliva a call and asked if they could use St. Francis to shoot one of their upcoming episodes again.

Oliva explained the way the process works — first, the production company comes down to the college to check out the space. They have the idea for their episode in mind and they have someone called a “location scout” come down to different buildings to take photos and check it out.

Then the location scout would bring the photos back to the producers and guest director to see what can be used. On this episode, and some others during the season, the guest director is Tate Donovan. In the past, Donovan has directed episodes of other shows such as The OC and Law & Order: Criminal Intent.

Then the producers, director, staff team and location team came to SFC to see what they were going to do with the set.

Then they came back the week after with their final decision and said they were going to convert the central floor of the Volpe Lounge into St. Margaret’s Hospital again.

However, this time, they used it as a nursing station instead of a waiting room. Oliva said: “You would never realize that it was the same area that was used in the film shoot in March, which was pretty cool.”

At about 6 am last Friday morning the crew arrived with their massive trailers parked all along Remsen Street and around 8:30am they started filming.

On the first floor, students and faculty were greeted with a sign that read, “Do not take elevator to second floor. Filming in progress. Sorry for the inconvenience”, making it clear not to interrupt the shooting of their scenes.

Oliva said: “The day began and we were controlling traffic back and forth through the library. But we thought, ‘You know what, this is causing too much congestion and we want to make things easier for the students and their entrance into the library’, so what we did was we opened up the third floor entrance and allowed people to enter and exit from the third floor.

“As the day went on, things ran a lot more smoothly and we were really able to have a pleasant day while they were filming here.

“They’re not just filming one take, they’re filming different segments of the television program, and it has been nice to see how many of our students are excited because they’re fans of the show, really being able to enjoy Gossip Girl.

“And as they were walking in and out of the library they were able to flash their cameras and get some photos of the actors.

“There really hasn’t been a ‘meet and a greet’ because, after all, the actors are working during the day. And although we would have loved for all of our students to have the opportunity to meet them, that just wasn’t conducive.”