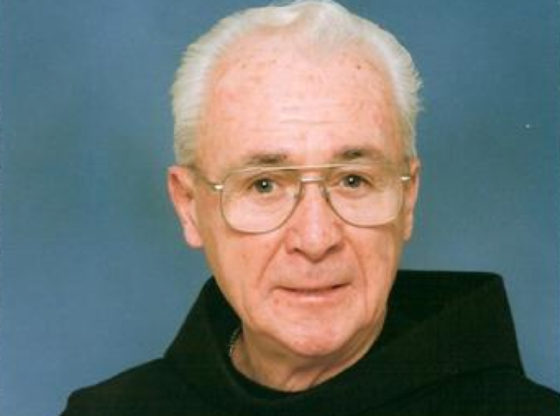 NEWS: The St. Francis College community was deeply saddened when Brother George Larkin, O.S.F., alumnus and Dean of Admissions, passed away on August 17 after a brief illness.

The 1960 graduate spent more than 35 years in the admissions office “personally recruiting tens of thousands of young men and women” to the Brooklyn Heights campus, as described in a statement released on the College’s website.

He was waked for two days at the College before being laid to rest following a funeral Mass at the Church of St. Charles Borromeo on August 21.

A close friend of Brother George for many years, Brother Robert proposed that the College be known as “the house that Brother George built,” describing his friend as “a great listener” and citing “his daily participation in the Holy Sacrifice of the Mass” as the source of his seemingly endless amount of energy.

Indeed, the outpouring of love and adoration for Brother George has been immense. A message board was created on the College website for students, faculty, administration, and alumni to share their reflections and memories of him.

“No college employee helped to open doors and allow us to dream as big as Brother George,” wrote Ruben Gonzalez, 2004 graduate and head of Student Activities. “He was the embodiment of our Franciscan culture and values, and the College is better for his unwavering support and dedication to our students, ideals, and mission.”

“He is a paragon of what an individual should strive to be,” added 2009 graduate Richard Kuberski.

For many students, Brother George was the first person to greet them upon entering the College and the last to wish them well after graduation. “He always had a smile and a ‘hello’ for you, and if he could help you in any way, he would,” said junior Christina Scotti.

“He was an asset to SFC and a friend to all students,” Senior Brittany Smith added, “His smile would light up a room and warm a heart. His heart and soul was St. Francis College.”

As much of a presence as he was around the student body, though, Brother George also left an indelible mark on his peers. “When I left Bishop Ford, he was instrumental in getting me a wonderful position at the college,” noted Sister Colleen Colbert, O.P., assistant director of Campus Ministry. “In all my years with Catholic Charities, when volunteers were needed for a big event … Brother George was the ‘go-to’ man,” wrote Brother Joseph Maloney, O.S.F.

In his homily at the funeral Mass, Father Michael Carrano pointed to Brother George’s decision to become a Franciscan Brother as an illustration of the commitment he had to both Jesus Christ and St. Francis of Assisi.

“In accepting this extra call, to follow Christ for over 50 years, he lived as a true follower of St. Francis through poverty, celibacy, and obedience,” he said.

Brother George first entered the Franciscan Brothers in 1951. After making his profession of vows just two years later, he began his ministry as a teacher at various schools throughout Brooklyn before arriving back at St. Francis College in 1971.

“Brother was a great Franciscan and had a great devotion to the rosary,” said Sister Colleen, adding that students could always tell where he was by hearing his rosary beads rattle around his neck.

And even though his physical presence will be missed around St. Francis College, Brother George will undoubtedly live on in the hearts and minds of everyone he touched.

As former SGA president Michael Phillips wrote, “I know that you will be strolling the halls of Heaven with the same smile and witty personality that you graced every student with at SFC.”