Home /News, Sports/SFC Men’s soccer fell to LIU in the closing game of the season 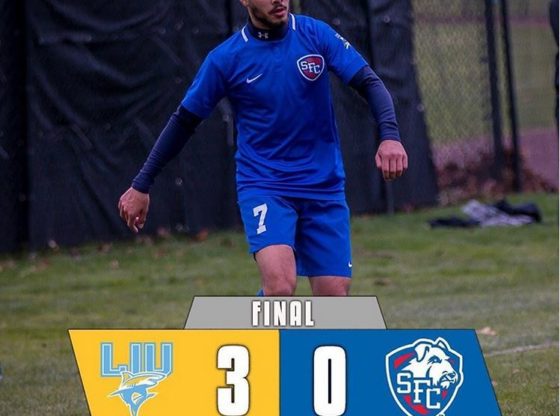 St. Francis College Brooklyn men’s soccer team was edged 3-0 by LIU in the season finale of the NEC Conference at LIU Soccer Park.

Terriers conclude the regular season in 6th place, with a record of 3-5-1.

Both St. Francis and Robert Morris collected a total of 10 points.

However, thanks to a 5-0 victory over Robert Morris on October 20, Terriers own the head-to-head advantage over the Colonials.

The Sharks opened up the scoring in the 29th minute, with a header by Fridtjof Andberg, off a cross from Kyle Parrish.

LIU extended its lead with an off-balanced shot by Xavier Verdu and sealed the match in the 60th minute of the game, with Jonas Dovland’s second goal of the season.

Terriers registered eight shots in the game, with five on them on goal.

The final results of the NEC regular season left a bitter taste, as St. Francis was one of the team candidates to get the playoff.

It’s the charm of this sport: you can never take anything for granted and be ready to fight for every single goal.

That’s what Terriers did, and with all the positive aspects showed throughout the season, the future can only be bright for the team.