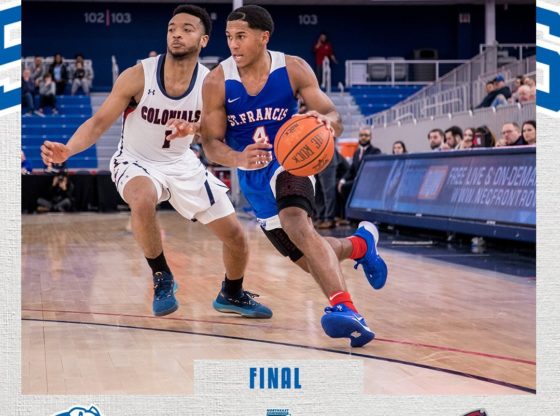 The St. Francis Brooklyn Men’s Basketball Team (13-18 OA) was overcome by the Robert Morris Colonials (17-14 OA), with a score of 58-59 in the NEC Tournament Quarterfinals at UPMC Events Center in Moon Township, PA, on Wednesday evening.

It’s a hard to swallow defeat for the Terriers, who stood up to the No. 1 seed team in the conference until the last minute of the game, with an admirable effort by all the players on the field.

At the end of the first half of the game, Colonials led the game with an advantage of five points and a score of 27-32. Terriers recorded an excellent three-point field goal percentage of 62.5%. However, Robert Morris got seven steals, which emerged to be crucial in the course of the game.

In the second half of the game, Terriers tried to fill the gap with the Colonials scoring 31 points and collecting a total of 25 rebounds. This wasn’t enough, as Robert Morris scored 27 points and eventually won the match, gaining access to the NEC Tournament Semifinals.

For Robert Morris, top scorers were AJ Bramah, with 22 points and eight rebounds, Yannis Mendy, with 9 points and three rebounds, and Dante Treacy, with 7 points and five steals.