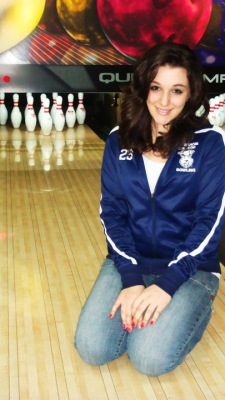 When most people see bowlers in action, they assume they take the ball and roll it down the lane.That is not the case at all. Marissa Gargiulo is one of the stars of the Saint Francis College Women’s Bowling team.

The SFC bowlers are on strict diets.They have to watch their intake; no junk food or soda is allowed and they work out early every morning. The team usually bowls for four to five hours a day at practice. Marissa started bowling at a very young age. When her local bowling alley went of out business, she stopped bowling. Upon entering Lincoln High School, her friends convinced her to join the school’s bowling team in her sophomore year. Her road to Saint Francis College began thanks to her close friends.

Her inspiration to bowl comes from her mother. She spent many hours bonding with her mother over bowling. They still bowl together to this day. Her mother served as a motivational factor along with her high school coach, Jeffrey Nash. The combination of these two people raised her average from a low 120 to a new average of 180 pins in just two months. When the time for applying to college rolled around, there was only one school Marissa planned on attending, Saint Francis College. What sold Marissa on SFC was head coach Dawn Gugliaro.

“She told me to believe that I wouldn’t only be representing a team; I would be gaining a family. Those words sold me.”

At Lincoln High School she was compared to Alex Stein, who was a top bowler at SFC. “She was an amazing bowler, and all I wanted to do was be on the team with her, I looked up to her and throughout high school she inspired me to be something I thought I could never become.”

Every bowler who steps onto the lane always wants to bowl that perfect 300 game. Marissa has not hit that mark just yet, but her career best is a 289. During that game she bowled 10 strikes in a row and a 9 spare. “I had bowled 13 games that day and that 289 was my last game.”

The Lady Terriers are in the Northeast Conference. What most people do not know is that the team is Division I in the NCAA. Bowling is no joke. “There aren’t any tricks to bowling a strike, there’s much more than just throwing the ball down the lane, especially because we bowl in Division I.” When most people go bowling for fun, they stick with the ball that they are most comfortable with. But each member of the team has five plus bowling balls each. “A bowling ball has a specific core, making the ball rotate differently than any other ball. It depends how you drill it as well. Whether you drill it to go long and snap into the pocket, or drill it for heavy oil so it powers through the oil and into the pocket, what ball you use is super important.” According to Marissa the hardest shot to make in bowling is the dreaded 7-10 split. “It’s something to really remember when you make it, it’s much more difficult then shooting a 300.”The travels, the practices, along with the daily grind of being a Division I athlete is very demanding.

Like any sports team there are stories from the road that will be remembered forever. Some of them can not be shared but she did share one in this interview.

“When the girls and I travel back from Tennessee, we need to wrap your equipment in saran wrap. We usually have tons left over, so we started an annual saran wrap race. It consists of us running throughout the airport wrapped around each other in saran wrap, usually people think it’s a normal thing because we’re from New York.” But as far as her bowling career is concerned, her aspiration is to win the NEC Championship. “As a team we want to finish strong and fight for what we deserve.”

When talking about her favorite moment as a member of the Saint Francis College team, she talked about rival school Vanderbilt. “My favorite memory so far was when we beat Vanderbilt for the first time since the bowling team existed here at SFC.”

We were so proud of each other and we did it as a team.” On the question of “Is Vanderbilt the toughest competition in Division I?”She replied “My Lady Terriers don’t have touch opponents, we have competition, but nobody we cant overcome. We don’t give up,we fight until the end, until that last ball is thrown down the lane.” The team atmosphere is also important to Marissa. “My favorite moment as a member of the SFC bowling team is coming back to the bench and see the people you care about the most cheering for you. When a teammate comes back after bowling a strike or after making a split you can’t wait to show the same respect and emotions for them.”

Between balancing a 15 credit course load and practice at least four days a week, and matches during the weekends, it can cause a stress overload. The team keeps their composure as a collective unit, until the minutes before the match. Before every match, the team lets out a loud “SFC HOORAH” and the team is ready to take on the competition. After every strike, the team also screams “HOORAH!” Even when the team doesn’t succeed they still support each other. “The girls and I are very close with each other; we spend a lot of time with each other, and plan on spending even more time with each other.”

When Marissa isn’t bowling her way to victory, she is studying as Communications major with a concentration in advertising. She hopes to become an independent interior designer after graduating college. She wants to have her own interior design business working on promoting herself and her business. “Before bowling, I was a nobody. I didn’t expect to even graduate high school before I started bowling again. I was determined to work through anything bad happening in my life. I had problems in school, problems at home, problems with myself, and bowling changed all of that. Bowling was my escape from all of that. I never thought it would change my life the way it did.”

When times got tough for Marissa, she turned to the bowling team for support. The team became that family for her. “My team is what picks me up when I am down,when I need someone to pick me up, I know that my girls are there for me, on and off the lanes.”

Most athletes only talk about the glamorous side of things.However this wasn’t the case for Marissa. To appreciate what all student athletes do, you have to look at the bigger picture. They balance studying, homework, practice and they still show up ready to perform on game day.

Bowling is no joke. There is a serious dedication that is needed to perform at the level the Lady Terriers perform at.

This “lefty” is doing it right here at Saint Francis College.

LE TIGRE ON TOUR ONCE MORE
THE MAN BEHIND THE NUMBER