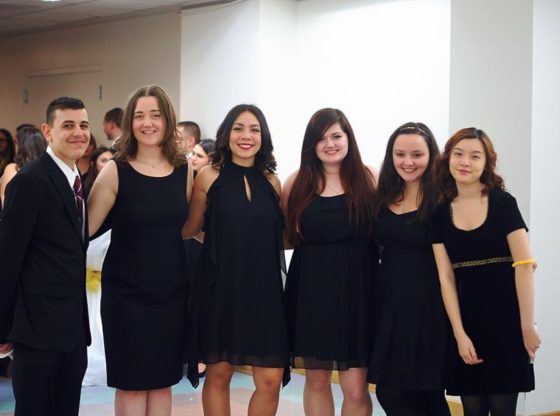 On November 11, Saint Francis College had the privilege of inducting its first chapter of members of the Alpha Lambda Delta Honor Society (ALD).

As a result of hard work and outstanding academic achievement, the members’ combined success is ultimately what made them eligible for membership in the local chapter of the Alpha Lambda Delta Honor Society. Their eligibility for membership was specifically based on exceptional academic performance during their first two semesters of enrollment at St. Francis College, for which the chapter’s co-advisors, Steven Boyarsky and Chad Lectura, wholly expressed their congratulations to the members for attaining the “high standard.”

Boyarsky stated, “Alpha Lambda Delta was the obvious choice to recognize our high achieving students as they enter into their second year here at SFC. It is our hope that, over the years, our incoming freshmen will become more familiar with ALD, its requirements, and its benefits, so that they have an immediate goal to work towards from their first day on campus.”

“It is important to recognize those students who begin their college careers on solid academic ground, as making the transition from high school to college is never easy,” Lectura said. “Therefore, as an administrator, faculty member, and alumnus of St. Francis College, I embraced the opportunity to assist in establishing our chapter of ALD.”

“Being the first president of the local chapter of the Alpha Lambda Delta Honor Society at Saint Francis College is an honor and having such a great team beside me is the key to our success of our newly inducted chapter,” Innamorato said.

At the induction ceremony, ALD’s 103 current chapter members were also given the honor of having ALD’s Executive Director, Eileen Merberg, speak at the installation as well as initiate the members into Alpha Lambda Delta. During this time, they were also privileged enough to induct five additional members into the chapter.

At the end of the ceremony, the chapter President was presented with a large plaque that listed the collective members’ signatures on it. Needless to say, this was both an awe-inspiring and a most joyous moment for Saint Francis College and our local chapter of Alpha Lambda Delta.

Presently, the chapter hopes to thrive in terms of membership success and hopes to inspire positive change in our community through charitable efforts, which include an ongoing book drive to assist underprivileged school children in accordance with the Franciscan spirit.