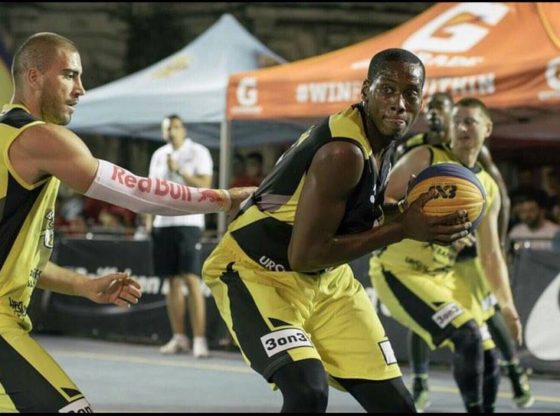 The 6’6 player – who graduated in May 2016 – has been playing for the English Basketball League’s Reading Rockets. Hooper’s success so soon after graduation did not come as a surprise. He had been working towards this goal while playing for SFC and saw it coming.

“I did expect to play professionally immediately after I graduated,” Hooper told SFC Today. “That’s what I been working towards.”

Hooper began working with MAC Sports Management & Consulting Owner Mike Baron after graduating and was signing his contract with the Rockets by July.

After playing just a few games in his debut season, the Bronx native has already identified what his strengths and weaknesses are.

“What I’m good at on the court is my spin move for sure,” Hooper said.

For the past month, he has been doing different tests and drills that have helped him improve his speed and ball-handling.

He still needs to enhance his alertness and jump shots if he wants to be a threat to the team’s opponents, Hooper added.

Hooper is already one of the Rockets’ key players, leading in scoring for the first two games of the season. He recorded 26 points in his first game and 22 in his second. However, this did not come as a surprise to Hooper.

“This is what I signed up for, basically to come out here and be 70 to 80 percent of the offense,” Hooper told SFC Today. “But leading the team in scoring, I guess that’s just from the hard work I been putting in.”

Playing professionally is much more intense than playing Division 1 in college, Hooper said.

“It’s basically like an every day showcase,” he said. “…It’s not just for fun no more. It’s business.”

His contract can also be terminated at any time due to lack of performance or behavior, Hooper added.

However, the training requirements are actually less intense than what he was doing under Terriers Head Coach Glenn Braica.

“It’s basically like you do everything on your own,” Hooper said.

Unlike a college team, Hooper’s new coaches expect him to have prepared himself 100 percent before each team practice.

“You getting in shape on your own, you lifting on your own, but once you hit the floor for practice you should be ready to go 100 percent for the whole two hours or so,” Hooper said.

Being coached by Braica for two years was a good experience for Hooper and he was inspired by the coach to continue his journey as a basketball player.

“Just the way he put his trust into me in my senior campaign and gave me the green light,” Hooper said.

Prior to his senior campaign, he looked up to some of the Terriers’ star seniors during the 2014 – 2015 season, including Jalen Cannon, Brent Jones, Kev, and Lowell. They inspired him to train hard and perform as good as he did during his last season with the Terriers.

“Just the way they lead by example, lead us to victories that made me want to be that kind of senior that the next juniors and seniors next up can see,” Hooper said.

Hooper will be back in action on October 30 when the Rockets take on the Hemel Storm.