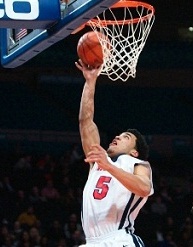 Hackensack, NJ — St. Francis College Terriers will be the #4 seed in the Northeast Conference Tournament after losing 45-44 to Fairleigh Dickinson on Saturday. The Terriers will host Quinnipiac on Thursday, March 1 at 7:00p.m.

The Knights scored the first basket of the game but St. Francis responded by scoring nine straight points. At the 11:31 mark the Terriers led 9-4 as freshman power forward Jalen Cannon already pulled down six rebounds.

FDU recaptured the lead, 33-31, as the Terriers were shooting just 15.8 percent from the field with eight minutes to play.

St. Francis gained life however, and went on a 7-2 run, reclaiming the lead 38-35 with five minutes remaining.

The Knights answered back with a 7-2 spurt and took the lead 42-40 with just a minute to go.

FDU’s Melquan Bolding led all scorers with 18 points. Teammate Kinu Rochford posted a double-double with 14 points and 10 boards. No other Knight was in double-figures.

Kevin Douglas had a team-high 14 points for St. Francis in just 22 minutes of action. Ben Mockford chipped in with 12 points. Teammate Jalen Cannon added 20 rebounds in the contest.

St. Francis struggled shooting in the game as they never converted more than 31 percent of their shots from the field. In the second half they shot 10 percent (1-of-11) from behind the arc and 25.9 percent (7-of-27) overall.

St. Francis has dominated the Knights recently however, winning seven of the last eight meetings dating back to 2007. The Terriers defeated FDU, 62-51, at home in Brooklyn Heights this past January.

In an NEC preseason coaches poll, St. Francis was predicted to finish 11th place (second worst) in the conference. To much of the leagues shagrin, the Terriers will finish no worse than fourth-place and have already tallied 12 conference victories, the most since the 2003-2004 season when they finished 12-6, with two games still to play.

St. Francis was tied with Robert Morris for third place before Thursday’s match-up’s but Robert Morris defeated Sacred Heart, 55-53, and took over sole possession of the #3 seed.

In that scenerio, the Terriers will be the #3 seed because they own the tiebreaker having defeated Robert Morris twice this season.

Last game however, with a chance to set a new school-record in conference victories, St. Francis blew an 18-point first half lead and eventually lost at Monmouth 79-73 on Thursday night.

Jessie Steele scored 16 of his 18 points in the second half as teammates Dion Nesmith and Andrew Nicholas chipped in with 15 points apiece for Monmouth. Marcus Ware was also in double-figures with 12 points.

The Hawks opened the second half on fire with a 15-5 stretch as Steele hit a three-pointer to take a 44-43 advantage over St. Francis with 14:54 remaining.

The Terriers regained the lead 45-44 with a Brent Jones jumper, but Nicholas scored five straight points for Monmouth to spark an 11-1 spurt.

With just 29 seconds left to play the Hawks were up 77-68. St. Francis then scored five straight points in the next 21 seconds to shrink the lead to just four. However, Steele responded for Monmouth by sinking two clutch free-throws to seal the victory.

Senior forward Stefan Perunicic has moved into 16th-place on the Terriers all-time scoring list with 1,152 points and has now hit 277 career three-pointers. He is 18 shy of the school record.