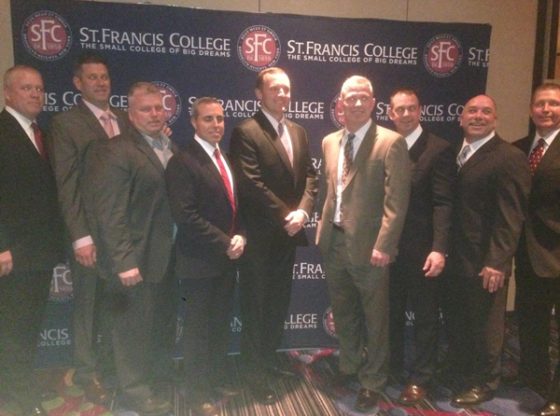 Brokaw did not attend due to illness.

After graduating with an English degree in 1988, Daly climbed the ranks of electricity and natural gas distributor National Grid for 25 years and is now president of the company.

“It’s humbling to be honored by a college I attended because it’s really all about the students and now I have a chance to give back,” Daly said.

He has taught as an adjunct professor at SFC for 20 years and is currently serving on the Board of Trustees.

David Ushery, a veteran journalist and news anchor for WNBC’s News 4 New York, was the master of ceremonies.

Ushery played a video of Brian Williams from NBC’s Nightly News, voicing his respect for Brokaw.

Brokaw is known for anchoring NBC Nightly News with Tom Brokaw from 1983 to 2004. He covered stories such as the Watergate scandal and the assassination Robert F. Kennedy. Brokaw has won a Peabody Award, two DuPont-Columbia University Awards, seven Emmy Awards and many lifetime achievement awards.

“This dinner is important… it raises a lot of money for the school and I was blessed with a scholarship so this is a very important night… to raise money for the right thing,” said Assistant Men’s Basketball Coach Jamaal Womack, who sang the national anthem at the dinner.

“The charter is the finest event of the year… it brings together the students and alumni that you don’t see at other alumni events,” said Board of Trustees Chairman John Tully.