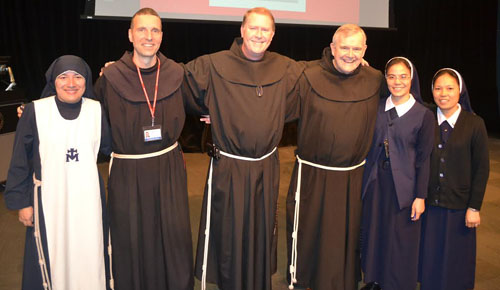 Clement began with a brief history on the Crèche, as well as on St. Francis of Assisi, founder and patron of the Franciscans.

Clement, having earned a doctorate in Medieval History from Fordham University, focused upon presenting the saint in a different light than usually seen.

The lecture focused on St. Francis, in Clement’s words as “being credited with inventing or inaugurating the first Nativity Scene…first described by St. Bonaventure in his Life of St. Francis, written around 1260 A.D.” The scene had been built and christened in Crecchio, a small town in Francis’ native Italy.

“In some modern perspectives, he is often cast as something of a hippie saint,” Clement said. “That, I’m afraid, is a modern superimposition being placed from a man in thirteenth Century Italy, opposed to the late 1960’s.”

Clement explained that Francis had a very negative perception of himself, preaching peace and penance through casting down the lowly in their sinful states.

“He rejected power, affluence, which he personally enjoyed as a young man and turned toward those in society who were destitute, outcast, despised, and feared, Lepers being foremost to those whom he was drawn,” Clement added.

As a saint often seen with strong connections to nature and animals, Francis’ admiration was “rooted in his conviction that all of creation was a marvelous gift from God, freely given to humanity, despite what he saw as its lowly and sinful unworthiness to receive such gifts,” Clement said.

Clement then explained that Jesus’ struggling years are what influenced Francis to devote so much time to the poor.

“Jesus was born homeless to a woman who would have been stoned to death for becoming pregnant in another way than relations with her husband,” Clement said. “Virtually nobody in 1st Century Judea, and I posit few today, would expect the Son of God, the King of Kings, to enter into the world in such lowly, and perhaps unsavory experiences. But it was precisely because of this that Francis was drawn to the poor.”

Afterward, Father Brian Jordan led the Blessing and prayer alongside Clement, Brother Gregory Cellini, and all who attended.