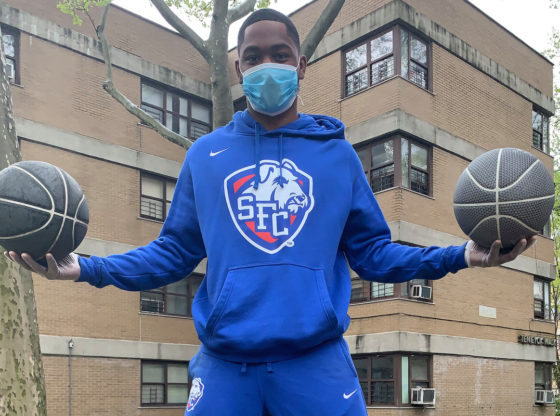 SFC Basketball’s sophomore guard Larry Moreno has become a social media star with his trick shots to the limits of the impossible.

It all started with the stay-at-home orders, and a lot of free time.

Maintaining social-distancing indications, together with his younger brother Dangelo Meza, he started going out early in the morning at the courts near East Williamsburg, Brooklyn, where he performed spectacular trick shots that immediately went viral and were featured on ESPN.com, SportsCenter’s Instagram and Facebook Top 10, Overtime, House of Highlights, NBC, and FIBA.

That’s a big score not only for Moreno himself, also known as “Light Cheese Larry” and the “Dominican Mamba,” but for all the SFC Community, since he underlines that one of the best things of this unexpected success is bringing attention to the school.

“I try to wear out our sweat suit when I make my trick shots, so everybody knows I go to St. Francis College”, he declared to the NY Post.

Moreno also received praise from his head coach Gleen Braica: “I don’t know how he makes them”, he declared, “People seem to be really interested. Some of the shots are incredible. Just amazing.”

Braica underlined the spirit and the determination showed by Moreno over the past two seasons, made difficult by a torn labrum in his hip, which required surgery in January 2019.

With just less than 31,000 followers on Instagram, including Drake, everyone is looking forward to the next crazy shot.

“I don’t know what’s next so everybody’s got to stay tuned,” he said.

Influencers in Communication: Monique Pryor speaks about her experience on season 16 of the Amazing Race
Meet Patricia Hughes, Associate Director of Admissions