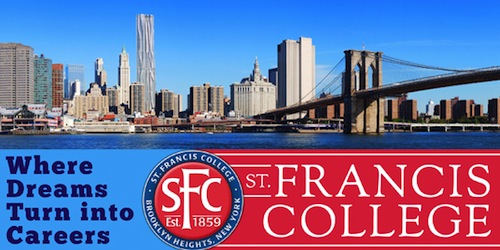 St. Francis College continues its rise to the top as U.S. News and World Report name it a Top Regional College in the North for 2014.

This past Wednesday, September 10, it was revealed that the Small College of Big Dreams could start dreaming even bigger after being credited as a Top Regional College and the student body couldn’t be happier.

When asked what he thinks of the achievement, junior Akeem Nelson says, “I think it’s great. It’s a good school.”

“We’re small, so the students are helped and the teachers are approachable. Whoever you want to speak to, even if it’s the provost or a dean, everyone is available to you,” he states.

According to U.S. News and World Report, several criteria are considered before a university can be ranked, including graduation and retention rates, faculty resources, and undergraduate academic reputation.

SFC junior Lauren Miller says, “As a student, going to a school that is regionally ranked is important. It’ll help show that St. Francis, even though it is a small college in Brooklyn, it’s a special school where all types of students from all different places around the country can come, get an education, and, since it is a small college of big dreams, actually achieve their goal.”

Since St. Francis College is an institution open to all types students from all around the world, U.S. News and World Report has dubbed the college as the fifth most Ethnically Diverse Regional College in the North.

St. Francis was also listed, for the sixth consecutive time, on Forbes.com’s America’s Best Colleges List this past August.