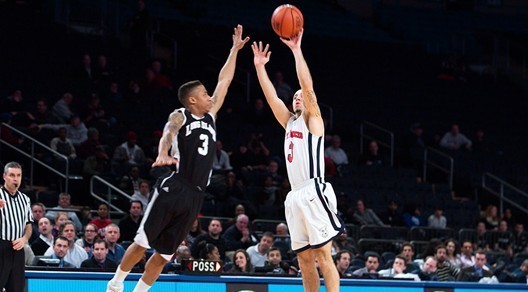 In the season finale, the St. Francis Men’s Basketball team defeated the Fairleigh Dickinson University Knights in a rout, 79-56, in front of friends and family as it was senior day for three of our own, Guards Ben Mockford, Aleksandar Isailovic and C Matt Milk at the Pope Physical Education Center this evening.

From the tip, it seemed as though the Terriers were focused and determined regarding the task at hand, jumping out to an early nine point lead within the first 9 min of the 1st half, 14-5 due to early hot shooting by Mockford connecting on all three three-point attempts from behind the arc scoring 11 for the first half.

The defensive pressure compressed the Knights to an impressive low in 13.6% and rebounding by F Jalen Cannon provided the Terriers with more possessions as he grabbed a total of 8 rebounds in the first half.

That coupled with the inside scoring of Freshman Forward Wayne Martin and Sophomore Forward Amdy Fall contributing a total of 10 points allowed the Terriers to complete the intial half with a comfortable lead of 35 to the Knights 11.

There’s more basketball to be played.

In the second half, more of the same continued.

The Knights eclipsed their first half total in points of 11 within the first 6 mins but the Terriers offense resumed its early rhythm and enhanced their lead, fading any thoughts of a Knights comeback spoiler albeit an increased effort on the Knights behalf.

The Knights cut that 20 point lead, as every team undergoes a run or two, getting to within their closest deficit since the first half of 16-5 to 15, down 62-47 with 5:10 in the 2nd via dunk by Sophmore Forward Xavier Harris.

Sometimes self-inflicted holes are two deep to come back from and Knights became subjected to that theory, as the Terriers made the plays to secure their route to victory.

A full court trap by the Knights was pierced by Jones who sped up the court to find Cannon lingering around the paint for an easy two which became a three point play as he was fouled, strengthening the Terriers lead, 70-52 with 3:22 remaining in the 2nd.

Another Mockford connection from three, a Jones layup and a Martin three-point play gave the Terriers more than enough for the win with less than 2min left till the resolution.

The Terriers notched their 18th win to end the regular season with an 18-13 record, 9-7 in the NEC Conference overall.

Four players scored in double figures for the Terriers as Cannon clinched a double-double of 14 points and 12 rebounds, Jones scored 11 points while dishing 11 assists, Mockford with 20 and Martin for 12.

According to the NEC Conference standings for the seasons end, the Terriers share a three team tie for the third seed with Bryant University and The Mount, Bryant ahead of the group due to a superior NEC Conference record of 10-6.

With The Mount, Bryant University and the Terriers sharing their own winning efforts, the Terriers will occupy the 5th seed in NEC Tournament.

With that 5th seed, the Terriers are positioned to meet the Mount, the 4th seed in the NEC Tournament of the quarterfinals beginning Wednesday, March 5th.

Senior day has finished, and now we will all have to wait and see what becomes of the Terriers entering March Madness.

FEVERED FORTIES: A TIME OF WAR, CHANGE, AND THE BLUES
PREVIEW: THE SFC TERRIERS HOST THE BRYANT BULLDOGS