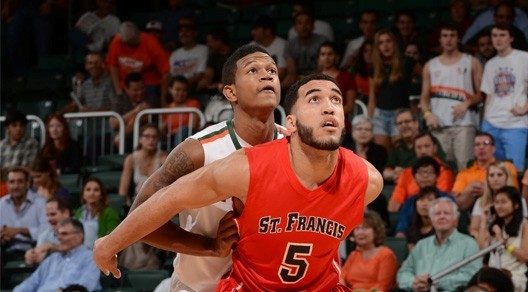 Basketball: The St. Francis College men look to extend their winning streak to five games with a win against the Columbia Lions.

The Terriers come into this matchup riding the heels of a four game winning streak. Over this past stretch the Terriers have played their best basketball to date.

They take on the Columbia Lions today at 4 PM in the Francis S. Levien Gymnasium.

Their last game marked their 9th win on the season as they knocked off the Delaware State Hornets 60-57 on the road.

They were led by Junior forward Jalen Cannon who has proved to be the Terriers best player all season long. He collected his second double-double on the season, scoring 17 points and grabbing 12 rebounds.

Another bright spot for the Terriers was the play of Senior guard Ben Mockford. In his second game returning from injury he put up a season high 17 points, shooting 5-9 from three.

Each of the last four wins for the Terriers all have had one common denominator. It is the intensity on the defensive side of the ball.
We have seen an aggressive commitment to defense from everyone on this roster. Sophomore forward Amdy Fall has been a great example of the Terriers defensive first mentality.

Over the past two games Fall has collected a total of 8 blocked shots. His defensive effort has not gone without noting as he is a beast in the paint.

Their opponents the Columbia University Lions come into the game sitting at 8-6 on the season.

This balanced scoring attack must be neutralized by the Terriers if they plan on extending their winning streak to five games.

Any time a team has not one, not two but three players averaging in double figures, you know you must bring your best defensive game.
Both teams live and die by the three point ball on offense, the Terriers are attempting an average of 20 threes per game and the Lions are not far behind attempting 19.6 per game. Look for the long ball to be a huge factor in this matchup.

This will be a great matchup as both teams come in sitting on top of their respective conferences. We will see if the Terriers will be up to the test of knocking off the first place Columbia Lions, on the way to their fifth consecutive win.