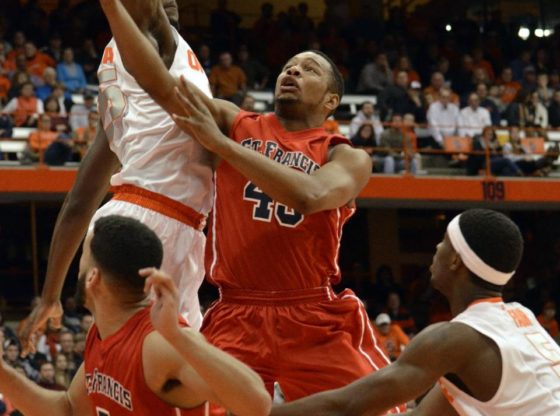 The St. Francis Brooklyn Terriers fell to the #9 Syracuse Orange 56-50, in front of a crowd of over 23,000 at the Carrier Dome at Syracuse University.

Syracuse sophomore Michael Gbinije’s lay-up, with less than one minute left, put the Orange ahead for good.

“This is the first team that really got the ball in the post. They scored 29 points in the paint. That’s more than half of their points. We did a great job on their premier guys.”

“Mockford is a great shooter and we left him open three times and he made all three. We got spread out and their post guys had opportunities and finished,” he said.

SFBK HeadCoach Glenn Braica liked the effort he saw from his team.

“It was a good effort. To come up here, and play this team and beat them is a difficult thing . We gave ourselves a chance and almost did it,” Coach Braica said.

Jalen Cannon led all scorers with 16 points and eight rebounds.

Syracuse answered right back with a four-point play from Trevor Cooney, to make it 28-22.

Going into the half, SFBK trailed Syracuse 30-26.

SFBK freshman Wayne Martin led the Terriers with nine points in the first half.

“In my mind I was studying the zone a little. In the second half,I started posting up in the zone and it got me going,” Cannon said about the early second half run.

Cooney responded right away, for the Orange, with a three to knot the game at 35.

The Terriers answered with back-to-back baskets from senior Matt Milk and Cannon to go back ahead 39-35.

Syracuse responded and tied the game at 40.

Senior Ben Mockford hit a three to put SFBK back up 43-40.

The Terriers kept the lead until the Orange tied the game at 46.

The Terriers came right back and regained the lead, 49-46, when Mockford hit another three.

Mockford saw his waiting for the proper shots helped him down the stretch.

“Patience helped. I didn’t try and hunt shots. I let it come to me today,” Mockford said.

“It’s tough, everyone thinks you can shoot against the zone but it is not your typical zone. The wings are 6-8, 6-9, and you have to find the gaps. Our game plan was to go inside.”

The Terriers would make it 50-46 on a Wayne Martin foul shot, but the Orange scored the final 10 points to secure the victory.

Highlights of the game can be seen here.

SFBK returns to action on Nov 23rd when they head to Coastal Carolina to play in the Maui-Invitational MainlandTournament.