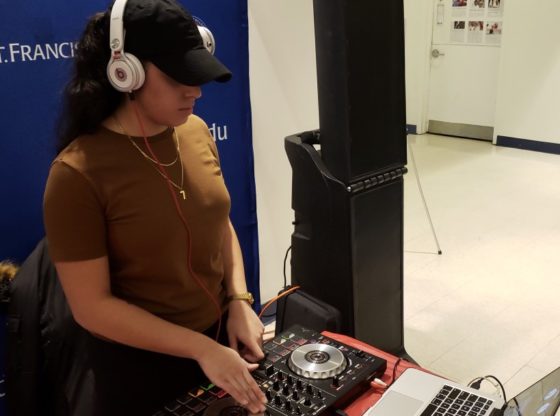 Amanda’s stage name is “Seven” and her hip-hop upbringing inspired her to become a DJ after absorbing the sounds of DJ Kool from a song called “Let Me Clear My Throat.”

Amanda recalled: “DJ Kool conducted when the beat stopped, when it started, he cued both Biz Markie and Doug E. Fresh while simultaneously providing ad-libs and crowd control.

“I always knew it was a special task, one I wanted to be capable of one day.”

Aside from other artists, Moreno learned on her own and paid for beginner classes at Scratch Academy – a whole school dedicated to DJing.

In the school, she was placed in small classes and learned hands-on interactive DJ skills.

Although she said that the classes were hard and weird, she graduated and got her first Pioneer DJ equipment.

“I bought a controller — which are basically turntables digitalized that work with your laptop — one of the cheapest I could find,” Moreno said.

As a part-time DJ, she enjoys summer and weekend gigs for bars, lounges, restaurants or anyplace that just wants a little more action.

For Moreno, there is a definite rush whenever the crowd gets going.

“It’s just a great feeling when you hit that one song that either everybody knows, or it gets everybody on their feet. It’s such a dope feeling! Everyone loves Cardi B right now. I think her and Drake are the most requested.”

Despite playing current artists, she mentioned that legendary DJs like Grandmaster Flash still hold a place in her heart.

“The certain importance of them have been drowned out … especially in the 70’s to the 90’s. Hip-hop wouldn’t really be in the certain platform if it weren’t for those DJ’s.”

Even though she is still new to the game, she is willing to train other DJs in the future. For Moreno, it’s all about applying what you learn into the machinery.

“My advice would be to respect the craft. Make sure your music knowledge is extensive, always know what’s hot and what’s not.”