SERBIA’S DZIGURSKI AT AN ADVANTAGE IN BROOKLYN 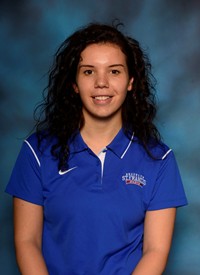 St. Francis Brooklyn Terriers women’s senior tennis player Dragana Dzigurski hasn’t had the easiest experience as an international student, but has enjoyed SFC so much that she calls it her second home.

draganaThe Serbian’s passion for tennis started in high school. After watching Serbian pro Novak Djokovic play, she decided to try it herself. Even though she had played basketball for 12 years, tennis won her over and she began pursuing it.

The sport helps her deal with everyday stress and calms her down after a difficult day in the classroom. These tough school days never affect her optimistic and positive attitude, which she uses to motivate her teammates and help them overcome any difficulties they might have on court. She uses her humor to try to clear their mind from their frustrations and give them a fresh new start at overcoming their struggle.

“The team is constantly improving. On every practice we work on our speed, skills, and tactic for the matches,” Dzigurski told SFC Today. “Every practice, we are better players than the ones that came to practice, and that makes our team better.”

The coaches give her and her teammates great support and advice both on and off the court.

“Our coaches give us great advice and drills that help us get to the next level,” Dzigurski said.

It was a struggle for Dzigurski to adapt to American life, but her wish of coming to New York and experiencing everything it has to offer came true once she came to St. Francis College.

“I love the dynamic of New York. Its high-paced lifestyle is what drew me to it,” she told SFC Today. “There is always something to do in New York and even though it is exhausting at times, I love the feeling of accomplishment I get once I return home after a long day of activities.”

Dzigurski – who has maintained a 4.0 GPA — is majoring in Communications with a concentration in English and minoring in Spanish. Her goal is to become a translator.

Dzigurski said the holidays are the toughest, as she doesn’t go home and spend them with her family. For nine months, Skype calls and Facebook messages are the only way she keeps in touch with her family and friends back home.

“I miss my family and hometown every day, but I know that I’m here to work on a better future for both my family and myself,” she said.

She explained that during those nine months, SFC is her second home and gives her all the support she needs, while helping her achieve her goals.

“I love that St. Francis values students’ work and that the St. Francis community gives its students the means to excel and achieve their dreams,” Dzigurski told SFC Today. “St. Francis College maybe is a small college, but it definitely makes dreams come true.”

After she graduates this May, she plans on staying in the states for another year to complete Optional Practical Training — a period during in which undergraduate and graduate students with F-1 status who have completed or have been pursuing their degrees for more than nine months are permitted by the United States Citizenship and Immigration Services to work for one year on a student visa, getting practical training to complement their education.

Afterwards, she plans on pursuing a Master’s degree in translation in Spain.

Dzigurski and her team will head to Jersey City, NJ Sunday to face the Saint Peter’s University Peacocks.