SEASON PREVIEW: TERRIERS’ MEN’S WATER POLO TEAM IS ON A MISSION BACK TO NCAA FINAL FOUR 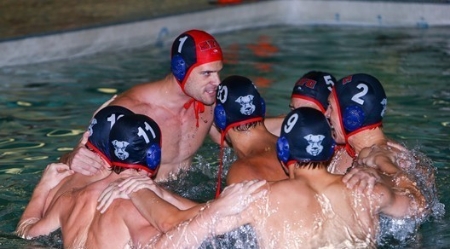 The St. Francis men’s water polo team hits the water tomorrow morning as they open their season against Princeton University. After a marvelous 2013 season, the Terriers hope to enjoy much of the same success, as they have their sights set on a third straight final four appearance.

It’s that time of year again and the Terriers’ men’s soccer team is back in action after a long offseason. This team is more than ready to get this season going and they are poised to make a run back into the NCAA Final Four. They have made it to the Final Four in back-to-back seasons and hope to make it a third, but it won’t be easy.

This team lost five players to graduation and of those five players they lost goalie Igor Mladenovic who was a three-time All American. A guy like that is extremely hard to replace but somehow the Terriers must fill the void that will be left by Mladenovic. That is what happens in collegiate sports, people graduate and now the team must adapt.

There is no reason why this team cannot be right back in the NCAA Final Four this season. Despite losing some guys this is a very talented bunch. The Terriers have a number of top players returning including leading goal scorers senior Vuk Vujosevic and senior utility Lazar Komadinic. Vujosevic led the team in goals with 51 and assists with 24. Komadinic was not far behind with 48 goals and 19 assists.

If there is one thing this team has going for them it would be a prolific scoring attack, which is something they most definitely need. They can score at will and that is something essential in water polo. The Terriers will be relying on junior driver Liam Veazey who will look to facilitate the offense. Last season Veazey scored 24 goals and had 15 assists, he plans to be a major part of this team here in 2014.

The road ahead won’t be easy and this team knows that. They will have to fight for everything they get because opposing teams will be bringing their best each time they face the Terriers. In order to be the best you have to beat the best and the Terriers are one of the top teams in the nation, so every opponent will bring their all when they square off.

Last season the Terriers went (23-12) overall and (9-2) in conference play. Right out of the gates the Terriers will be tested with a game against Princeton University. The Terriers knocked off Princeton last season in the CWPA Championship, which sent them to the NCAA Final Four. This is a huge game and Princeton will be seeking a bit of revenge from the Terriers. This match is a good test early on for the Terriers and it will give them a good gauge of where they stand coming into the season.

The season is certainly a grind and a lot of work needs to be done in order for this team to achieve their goals. They will kickoff the season tomorrow morning at 9:15AM when they take on Princeton. Then they will play later on in the day at 6:00PM against George Washington University. Let the games begin.