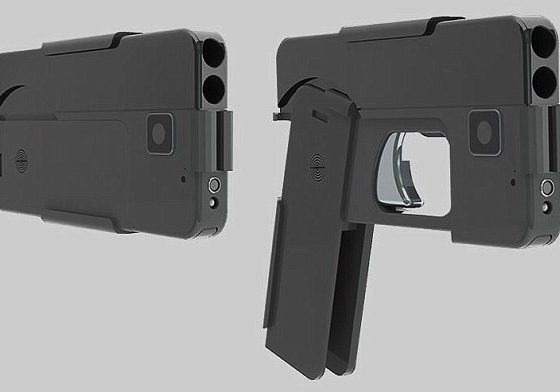 Senator Charles Schumer is trying to put a stop to a new handgun that is an exact replica of an iPhone.

The New York senior senator urged the Bureau of Alcohol, Tobacco and Firearms and U.S. Department of Justice to do something about the new firearm that hasn’t hit shelves yet.

“The latest ‘great idea’ for a concealed gun should come with 9-1-1 on speed dial because this iPhone gun is a disaster waiting to happen,” Schumer said in a statement. “This iPhone-lookalike handgun poses a serious threat to law enforcement, kids and more.”

Ideal Conceal’s double-barreled .380-calibre handgun is expected to go on the market by mid-2016 and be priced at $395.

The police will not be able to determine whether a criminal is pulling out a phone or gun, Schumer said.

He also worries that children will mistake the weapon for a phone.

“The bottomline is: the feds must investigate this before sales take off and this weapon winds up in the wrong hands,” he added. “That’s why I am urging the ATF and the Department of Justice to step in and investigate these handguns now – before they hit store shelves.”

Kirk Kjellberg – the product’s creator — defended it on “CBS This Morning” by saying that its design would allow a responsible owner to carry it more freely.

The senator is urging the ATF to classify the weapon as illegal. Guns that are disguised as harmless objects such as wallets and pens are typically illegal, according to Schumer’s office.

The gun may also not meet the requirements of the undetectable statute – which deems a weapon illegal if it is not detected by x-ray machines at airports, Schumer said.

Schumer wants the feds to investigate both possibilities before Ideal Conceal releases the product.