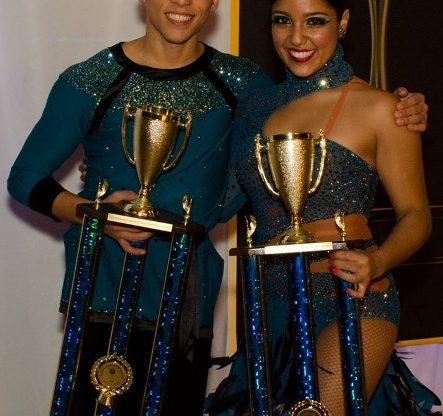 Freshman Brianna Rios is not just active as a Physical Educaion major at St. Francis College, but also on the dance floor around the country.

At age 4, her parents started taking salsa and let her watch the classes. One day, her mom was practicing at home and Rios pointed out that she was doing one of the steps wrong.

Her parents then signed her up for classes at Salsa Groove in Bay Ridge. From the beginning, she performed well and never had trouble learning new routines.

“The instructors pretty much realized it was pure talent. It was just in me,” Rios said.

She said the most difficult part has been now having to juggle both college and dance.

Rios started competing three years ago. Before then, she only danced as a hobby on the weekends.

“I was never being judged or competing against other people who are just as good or better, so now it’s like intimidating almost. You gotta like get that right mindset to go in competitions,” Rios said.

In February, she won first place in the World Salsa Summit and became the youngest dancer to win in her division.

She started teaching salsa at age 14 and has never worked a typical student job such as retail like her classmates have.

“I would love to because I haven’t had it yet, which is weird to me because everybody else has, but ever since I was 14 my only job has been dancing,” she said.

After Rios graduates from SFC, she plans to move on to a Master’s program in P.E.

She plans to be a high school P.E. teacher, but will continue competing.

“I plan to continue dancing because that’s what I have a passion in, but that’s why I chose Phys Ed, because they correlate together,” she said.

As a P.E. major, Rios will learn more about the body, which she is also interested in.

Her decision to major in P.E. came in her junior year of high school when she realized dancing is not a secure career.

“I knew that dance was big, like I’m gonna be a dancer forever, but I knew that dance can’t last forever. It’s not as stable as getting a degree in school for something, so I had to find something that I liked,” Rios said.