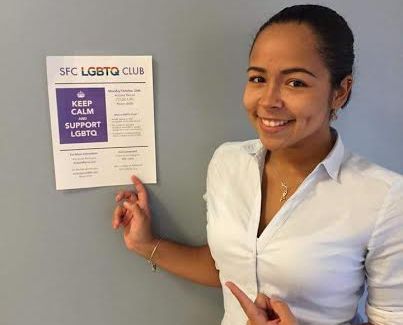 A club like this is necessary with such a diverse student body, students say.

The club has had one introductory meeting this year, but has many more to come. The objective is to help students feel safe, confident, and comfortable in an accepting environment. Often times LGBTQ students feel targeted or discouraged because of their gender or sexuality. The club offers support from people who have had similar experiences.

“When I got the email about the first ever meeting of the LGBTQ club at SFC, I felt amazing,” sophomore member Carlos Pineiro told SFC Today. “It was definitely something needed and I’m glad now we have a safe place for all students; a place where no judgments are allowed and a lot of support and understanding goes in.”

The club was founded by junior Adriannah Rodriguez, who was shocked by the lack of representation of the LGBTQ community at SFC.

“There are many students on campus that are a part of the LGBTQ community like myself, who can feel lost in a Catholic school and even scared to be judged for being their true selves,” Rodriguez said. “The club will stand as an outlet for students to feel welcome and safe.”

The club is adamant about anonymity outside meetings and making a drama free community. It is made clear that not everyone in the club may be ‘out’ and there is no discussing someone’s gender identity or sexual orientation outside of meetings.

“I want this club to be the ultimate safe place,” Rodriguez told SFC Today, “We are here to support each other and listen to one another. Any information shared in the club space will be kept private. Nothing will be shared to the public unless give permission by the club members.”

The LGBTQ club is also open to allies, students and faculty who support the LGBTQ community. Welcoming allies into the club may get more students involved, and help spread awareness of equality, Rodriguez said.

“It’s the allies that are going to help communicate our message to the people that are not too accepting of our lifestyle,” Rodriquez said.

Rodriguez and others are aiming to shine a positive light on the LGBTQ community and create an open forum where students can learn more about sexuality, identities, and lifestyles in a judgment-free place.

“I believe the LGBTQ Club is good for the College,” Cellini said. “As Pope Francis says, ‘We need a conversation which includes everyone.'”

“The college is very open to starting new clubs and organizations, and students are encouraged to create clubs for support, recreation and education,” Cellini added.

The next meeting will be this Monday during activity period in room 4404.