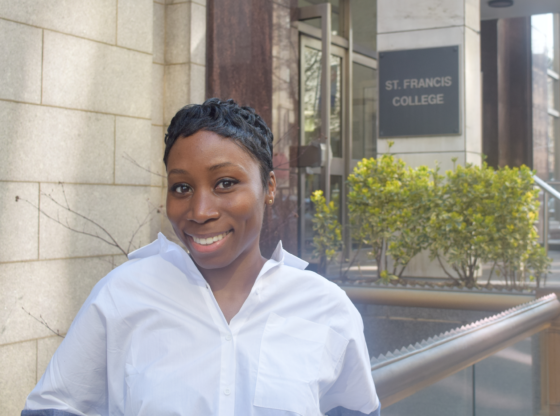 Sade Falebita graduated from St. Francis College with a B.A. in Film and Broadcasting and a B.S./M.S. in Accounting in 2012.

Sade then worked as an auditor with KMPG before obtaining an M.S. in Journalism from Columbia University.

Asked to give advice to current SFC students, Sade said: “I really encourage students to explore.

“It’s very important to take the time to explore different things — different careers, different interests, different hobbies, whatever it is because you never know what you end up loving.

“And I think sometimes we’re trained to think on one track. The truth is, there’s no one path.

“Your journey could be so unconventional … and unique and still get you to where you want to be, or take you to places that exceed your expectations that you could have never even imagined.

“My journey has definitely not been a straight path but I’ve still been able to accomplish so much and have these amazing experiences.”

Sade’s route to SFC was not straightforward.

Up until the summer after Sade’s high school graduation, she thought she was going to DePauw University.

“My mom saved a lot of the mail that came from St. Francis and pulled it out and was like, ‘Hey look at this. This might be really great for you’.”

So in the middle of the summer, “We went to St. Francis together and we met with Brother George … He interviewed me …accepted me, placed me in the Honors program, and gave me a full scholarship.

“He really set the tone for the rest of my time here. He was so warm and just really caring … He offered me so much.

“You know, I think about it sometimes and I’m just like ‘wow’.

“It’s just very interesting how everything happened … My mom saved that mail … and pulled it out and we went together. She’s always been there during those big moments.”

Between her fourth and fifth years at SFC, Falebita was offered a full-time position at KMPG, the giant accounting and professional service company, and one of the Big Four auditors. She interned at KPMG for two summers prior to receiving this job offer.

At KPMG, Sade was an auditor. She was soon promoted to second associate and then senior auditor.

Around the time of her senior auditor promotion, Sade found out about her acceptance to Columbia University Graduate School of Journalism.

She realized that she did not want to pursue finance long term and did not want to become a partner at a firm, and so Sade started the 10-month bootcamp-like program at Columbia in 2014.

Upon completion of this program, Sade had an opportunity to teach filmmaking at a  summer camp in upstate New York.

It was there that she discovered that she really enjoyed teaching.

She also got a job as a producer on a short documentary film for the Museum of the City of New York.

Soon after, there was an opening for the Community Programs Manager Position at DCTV, which Sade applied for.

Around the same time, the Associate Director moved and that position was open as well.

Sade interviewed for the Associate Director position and got the job within the first couple of months of working at DCTV.

She has been working there since spring 2016, and also teaches filmmaking.

Sade said her heart was not in finance and she had to return to her roots in communication arts, specifically film.

“The same film program that I run now … when I was in high school, I was in that program.

“So essentially, this program molded me into the person that I am today, and that’s the reason I majored in film and broadcasting at St. Francis College

“It was introduced to me when I was in the program in high school.

“I had the opportunity to work on a few documentaries and be nominated for a student Emmy.

“I went to New Orleans to cover the Hurricane Katrina aftermath. That was a huge experience for me.

“That program definitely means a lot to me. It’s where I grew up and to have the opportunity to come back and support students means a lot.

“It’s very special to me … it became a big part of my life.

“Although I was in auditing and although I was getting promoted and moving forward, I wanted to get back to my roots.

“Because I was out of the field for a while, I decided  grad school was the best option so I could get back into the groove and learn some more and absorb that before moving forward in the industry.

“In terms of my goals and what I want for myself in the future, I always go back to this moment I had a couple of years ago when I was on my way back from Pennsylvania … I was on the bus and I was thinking about what I  want to do, what fulfilled me.

“I thought of three words and wrote them down: youth, women, and media …

“I find it really interesting that now I’m back here in this capacity at DCTV, working with youth, leading the youth media program, and also … partnering with women my age, my colleagues who are freelancers or producers or filmmakers. I feel like I’m fulfilling [my goals] now and it can only evolve from [here].

“I want to continue doing that work and build upon it and have it reach a larger audience.

“Where do I see myself in the future? I see myself continuously empowering youth and women – and men too – and continuing to do what I do but on a larger scale.”

In addition to doing a lot of writing recently and working on a performance piece, Sade says she has been exploring several fields, including photography, cinematography, and VR.

“I’m a creator, and right now I’m exploring the different realms of creation.”

Sade’s motto is “empowerment through experience.”

Prof. Steven on having the best of both worlds
The man for all seasons of mass media