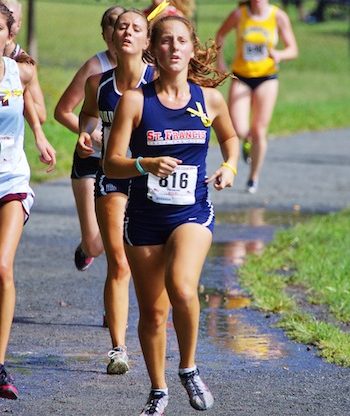 Rosemarie Petrizzo is a sophomore on the women’s track team here at SFC. Petrizzo was born in Brooklyn, New York and was raised in Staten Island, New York.

Her father Frank Petrizzo, graduated from SFC in 1975 and has inspired his daughter(s) to become part of the welcoming SFC family.

Petrizzo said: “I have been walking the halls of SFC since I was a young girl, my dad always brought me to the basketball games. I did not want to go away to school, but I did not want to stay on Staten Island. SFC was the perfect choice for me.”

However, Rose is not the only Petrizzo attending school here in Brooklyn. She’s a triplet! Walking the halls of SFC is her twin sister, Camille Petrizzo, who is a recent transfer to SFC.

She is a Biology major and hopes to one day become a veterinarian.

Her brother, Frank Petrizzo, attends St. Josephs College only a few subway stops away. He is a student athlete as well pursing baseball.

She was an athlete her entire life. Petrizzo tried many sports including basketball, dance and softball but running was never one of them.

However, in high school she needed a change. She decided to join the girls track team and has had a love and dedication for running ever since.

When Petrizzo began to look at colleges, she made a decision to run track on the college level. She knew it would not be easy, but she was willing to take the risk.

SFC did not recruit her but she sat down with Coach Kyle Brown and knew she would fit well perfectly with the team.

Petrizzo said: “It has been great meeting different kinds of people and hearing their running experiences. The team has made my college experience that much better. It is great to be a part of something.”

Now that Petrizzo is a sophomore handling school and track it is getting more and more difficult.

She gets home very late four to five nights a week and is exhausted by the time she sits down to start schoolwork.

It is even more difficult because she does not live on campus and has to commute from Staten Island to Brooklyn every day.

Recently, she has officially declared her major in psychology. Her classes require her to do field experience, which she does in Park Slope, in between classes and practice.

Practice for the women’s cross-country team starts everyday around 4:00 p.m.

They practice in Prospect Park, which is about two and a half miles from SFC. The girls run to the park as a warm up.

They do long runs, mile repeats and various other distance training workouts. On Monday and Wednesday the girls do about a forty-minute workout in the weight room, with the conditioning coach focusing on their core, arms and legs. On Sunday’s the girls have their long run of the week (about 8 miles) but they do that on their own time at home.

The women’s cross-country team has been doing very well this season. Even though it is a small team of about seven to eight girls, they are stronger than ever before.

Petrizzo said: “As a team, we have become united more than ever and have been placing better at our competitive meets.”

Their recent accomplishment was at the Albany meet about two weeks ago where the girls placed 12/23 teams overall. The top four girls crossed the finish line only seconds apart (20:05, 20:14, 20:15, and 20:17) which helped them to place higher as a team.

The next big race is this weekend at the Conference meet in Holmdel, New Jersey, hosted by Monmouth University. Petrizzo has a personal best of 19:52 for her 5K-freshman year. She hopes to run close to that this weekend.

Looking into the future, cross-country will soon be ending and indoor track will begin. The team divides into smaller groups for the indoor season, because everyone has personal events to train for.

Petrizzo said: “My training slightly changes but not much, I keep up the high mileage because that’s still my focus.”

As hard as it is being a student athlete, Petrizzo wouldn’t change it for the world. “Running has become a major part of my life and I love every second of it even through the blood, sweat and tears.”