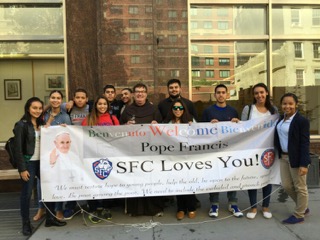 Hispanic Heritage Month was from September 15th though October 15th. It is a time to celebrate all Hispanic countries and learn about the many different cultures.

Rodriguez believes that it is important for SFC to celebrate the month because St. Francis is an inclusive school that embraces all cultures.

“SFC is a very diverse school with students and faculty from all over the world,” she said. “It’s great to celebrate our culture and educate others on what we have to offer.”

The Latin American Society, or LAS, is a club that celebrates being Latino.

“We want to embrace our culture and educate the student body of what it really means to be Latino.” said Rodriguez.

She cautions people against stereotypes of Latin American culture, stressing that L.A.S is more than a group of people who can dance and cook good food.

Although Latin American Society was present when Rodriguez entered St. Francis, it was not very active on campus. Recognizing the underrepresentation of latinos on campus, Rodriguez sought to re-vamp the club this year to make a longstanding impact at SFC.

“My best friend and now co-president Katherine Cardy and I both decided to bring it back to life in full force,” Rodriguez said. “We noticed that there are a lot of Latinos on campus and decided that having a club to make new friends and share great memories would be a good idea”.

LAS meets several times throughout the month. Their objective is to try and make as many St. Francis events and support the events of other clubs on campus.

The club is planning many upcoming events, the largest being the “We Thank You Warriors Gala” where they will be raising money for the Wounded Warrior Project. This event will be held on Saturday November 28.There will be live music performances and raffles.

Other events include a documentary screening of The Mothers of Plaza de Mayo as well as food sales to raise money for “Operation Christmas Child”- an organization that donates supplies to orphanages in Honduras.