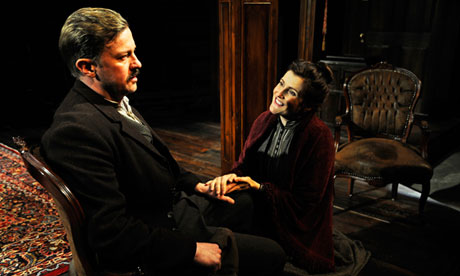 Rutherford & Son is an off-Broadway production at the Mint Theater in New York, running from February 4th through April 7, 2012, directed by Richard Corley and featuring Robert Hogan, Eli James, Allison McLemore, James Patrick Nelson, Sandra Shipley, Dale Soules, Sara Surrey, and David Van Pelt. The play premiered for the first time in London in 1912 (and was staged in NYC in September of 2001 but cancelled due to the 9/11 attacks).

When Edwardian first audiences, drawn to the potent drama and themes of the play, learned the playwright was a young woman, they were quite surprised; but clearly feminist concerns are at the heart of the play.

Katherine Githa Sowerby’s father ran a glass factory that had been in her family for multiple generations. This sparked the idea for the playwright. The play takes place in an industrial town in northern England, and the time period is right before the First World War.

Mr. Rutherford, said to be the main character, is a widower, but his house is far from empty. He lives with his three grown children, each of whom, especially his daughter, play prominent roles in his life and in the play – in fact, the play is, others might argue, more about his children (and their life decisions in his shadow).

Janet is Rutherford’s 36-year-old unwed daughter (and a focal point until, toward the end of the play, the focus shifts to the daughter-in-law, Mary). She is bitter and sullen about the life she lives because she is miserable living under Rutherford’s rules. John, Jr. is the college-educated son who seems to be lost on his path in life.

He recently returned home with his wife and baby son. Richard is the youngest son who wants nothing to do with his father and is a hapless pastor at a local church. Mr. Rutherford is a widower, which may explain some of the underlying issues in his patriarchal character and his children’s unhappy lives – the absent mother.

There seems to be very little affection in this house. Rutherford’s sister lives with them, but she too is bitter and even nasty to the others. Rutherford owns a glass factory, which was founded by his father and is one of the largest businesses north of London, but the business (as revealed during the course of the play) is suffering financially and is in need of new stewardship with the impending retirement of Mr. Rutherford.

In fact, in many instances during the course of the play, the business is itself a character, referred to quite often – this or that must be done for the sake of Rutherford.

When the play opens the audience can easily feel the tension among the cast on the stage. The play takes place entirely in the Rutherford home, and the actors move around between the dining room, living room, and office on a small stage. There is a sense of confinement. Nevertheless, the set was beautifully crafted with quite an attention to period details (especially in the costumes and dialect).

The theatre was very small, seating only one hundred people; so the audience felt part of the Rutherford home in such proximity to the stage and actors. In spite of the beautiful hanging glass etchings (nearly transparent) that adorned the stage, as well as many glass props around – bowls and vases – the house had a very oppressive atmosphere.

The audience does not understand why but quickly realizes it is because of the fear that Rutherford inspires in his family.

Rutherford’s business was very successful for quite a while, but recently the business is going through some tough times, which brings humiliation to Rutherford, so that he needs to take out large loans to keep the business going.

Clearly this theme of business success/failure hints to the figurative impoverishment of tenderness bestowed on his children.

The image of the glass also figures largely – the fragility of the many relationships, brittle to the touch and about to be shattered.

Rutherford needs an idea and he needs it fast. John, Jr., one of Rutherford’s sons, talks tirelessly of the invention he is developing – an alloy, which he thinks, will make the glass production more economical and reasonable.

He knows the idea will bring prosperity to the industry, riches to him and his family, and nothing to the Rutherford family business, which he hates. He expects the proper compensation from his father even though the idea has yet to be proven. However, when Rutherford finds out his very own son is trying to sell his invention to a competitor he is hurt in more ways than one.

But, instead of confronting his son he swindles one of his foremen to steal the recipe from John, Jr. The play comes to a climax when Rutherford is confronted by his family and threatens to destroy the family as well as the factory. Themes of deception (in spite of the transparent images from the glass), thus abound. In fact, one could say that Mr. Rutherford is a man self-deceived.

Rutherford physically seems to be an extremely strong character, but as the play progresses the audience comes to realize how fragile he truly is. He has spent all the years of his life dedicated to his business. He took no time for himself or his family. Work is going to fill a large part of one’s life, but it should never fill one’s entire life to the detriment of family. Life is too short to waste too many days at the office and not enough days at home. This is an unfortunate theme that ran through many novels and plays during this time (as in E.M. Forster and John Galsworthy).

As the play progresses, the audience comes to realize, then, that the emphasis in the title of the play falls more to the significant: & Son.

In the end, Rutherford loses everything: his children have all left, and his business is nearly broken. But his daughter-in-law Mary surprises him (to say nothing of the audience’s consternation) at the end of the drama. Mary demonstrates the role of a loving parent. She would do anything for her son and is even willing to sacrifice her own happiness to guarantee a better life for him.

Simply put, Mary says that she would let old man Rutherford have her son (after ten years of her upbringing) to be his heir. (Her feckless husband had run off to Canada to find a new fortune.)

Rutherford and Mary are ironic characters: she is the parent who puts her child first no matter what, willingly sacrificing her own happiness for him and realizing that she can make the ultimate deal so that there is an & Son; and then there is Rutherford, who dominated his children under the weight of his business, pulverizing their spirits in his indifference to their needs.

Rutherford & Son was a very well done, powerful production of character and family in the heart of New York City. The actors were properly cast and kept the audience engaged thoroughly throughout all three acts.

The play wrapped up its final production earlier this month, but look out because it will be sure to come back in the future. If not pick up a copy of the playwright at a local bookstore it will definitely be worth your time.

REVIEW: BEWARE OF THE BULLYING
MOCKFORD SELECTED FOR GB TRIALS